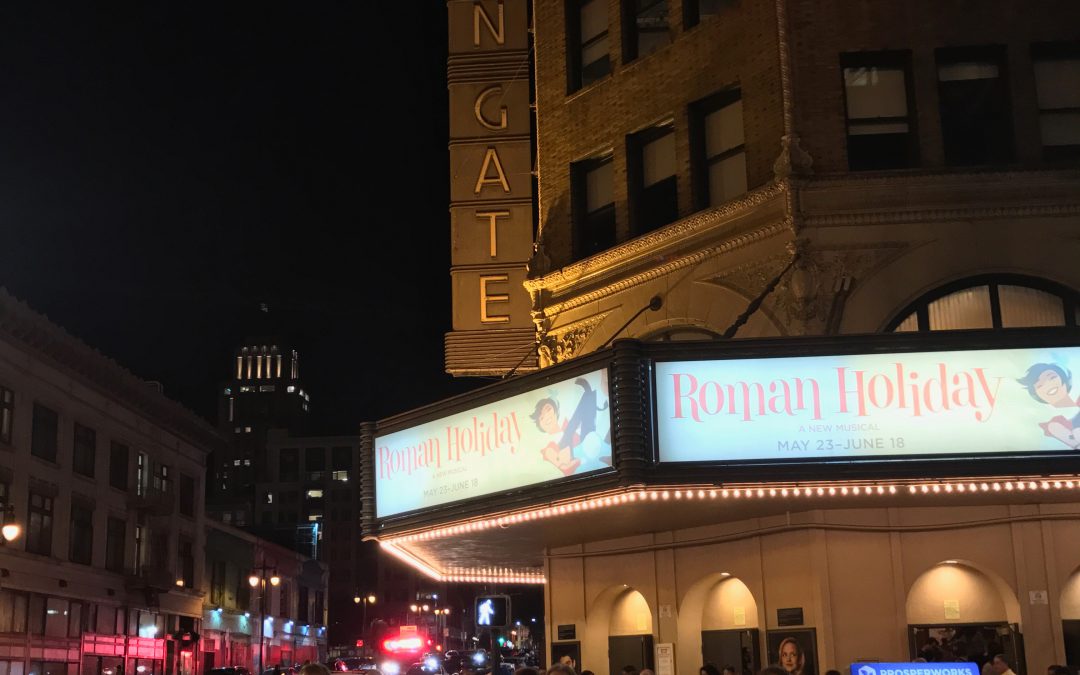 This is the out of town tryout for Roman Holiday at the Golden Gate Theatre in San Francisco. The show intends to transfer to Broadway in the fall. It’s based on the 1953 film starring Audrey Hepburn (who won an Oscar in the role), utilizing songs by Cole Porter.

I viewed the third performance of this show, and let’s keep in mind that it’s not really fair to review it in its present state. There were several minor mishaps, including flubbed lines and missed sound and lighting cues. There was also a 10 minute show stoppage (a first for me) when a backdrop came partially unmoored from the rigging and traveled part way along stage during a scene, taking the actors with it. To their credit, they stayed perfectly in character until the stage manager beckoned them with a disembodied hand to leave the stage for safety reasons.

In a word, this show has charm. There are certainly bits that could be improved (particularly the first ten minutes or so), and the whole thing needs to be tightened up (which will happen as they run it more), but it already has considerable humor, a great cast, and better than expected set design. It also hews closer to the movie than I expected, which turns out to be a good thing.

In fact the show is best when it sticks strictly to the movie, which made great use of humor to tell its “Cinderella story in reverse.” Stephanie Styles (Princess Anne) does an uncanny impression of Audrey Hepburn—at least when she’s quoting her directly. Any time she’s saying something new, the accent drops and the certain charisma Hepburn brought to the character begins to fade. This can all be fixed with more practice.

I was rather impressed with the sets on this show, which were more three-dimensional than many shows I’ve seen in the past few years (with one exception being Groundhog Day). Joe Bradley’s apartment in particular was very nicely built and well lit. Viewers of the movie will remember that a good chunk of it is spent inside this set, so it was a good thing to spend resources on.

The show is hampered, however, by its jukebox approach. While they did an admirable job weaving in the pre-existing Cole Porter songs (many of which you have undoubtedly heard made famous by Sinatra and others), the reality is that a musical needs its own score. Porter was an extremely talented composer/lyricist, which is the only saving grace here—his songs are sufficiently complex to barely make the grade in modern theatre. Porter wrote many musicals, after all, and the style does more or less fit with the time period the story is drawing from. Still, I’d be much more interested in seeing the version of this show that utilized a new score. Perhaps they think Cole Porter will be an audience draw? (The producers and director previously worked on Beautiful: The Carole King Musical.)

Overall, this show will likely appeal to the nostalgic set: any fans of the movie or of Audrey Hepburn, anyone who loves Cole Porter or Frank Sinatra, or anyone who just wants a wholesome musical with a bit of heart and a big dash of delightful charm.

The cast: The whole cast does well. Stephanie Styles (Princess Anne), is a remarkably accurate singer with incredible tone. She played Katherine in the First National Tour of Newsies, which is a very demanding vocal role, and that talent pays off here. Drew Gehling (Joe Bradley) embodies the reporter perfectly, as does his sidekick Jarrod Spector (Irving). Georgia Engel (Countess) received applause on entrance, which I knew meant she was famous, but I had to look her up. Turns out she’s a TV actress from shows including Everybody Loves Raymond and The Mary Tyler Moore Show. She was great (and she was one of the two characters pulled aside by the unexpected set disturbance).

Rating/Verdict: It’s not fair to give a verdict or rating for pre-Broadway shows, as they aren’t yet in their final form.