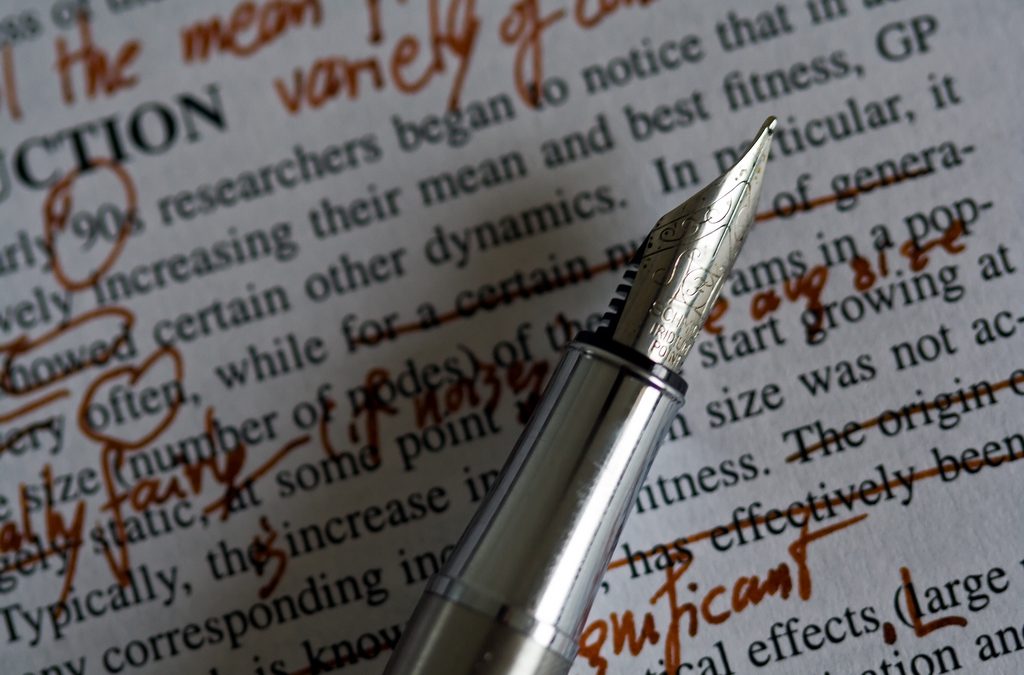 This past year I’ve done a lot of writing, but I’ve also been heavily focused on revision. I hate revision, but it’s a necessary evil in this business. So I thought it might be interesting to talk about some of the techniques I’ve developed. Now, this isn’t meant to be prescriptive—my methods won’t necessarily work for you—but I thought it could be an interesting exercise.

Polish as you go

The first step in my revision process involves polishing the text as I go. I aim to write about 2000-3000 words a day, five days a week. Before I can begin writing the next day, I have to do a polish pass on the words from the day before.

Why? Because of the next step: the pacing read.

After I’ve finished writing an entire manuscript, I immediately render it to Kindle and read it as fast as possible. I’m talking fast, ideally 50k words per day. I do this without a laptop in front of me, just a Kindle and a phone. I use the phone to take notes as I read—the phone is a bit tough to type on, which means I only tend to write really brief notes and use a lot of shorthand. This keeps my head inside the text.

This only works if I’ve polished the manuscript first. And I don’t mean polish the whole thing at once, as a second draft. When you do it that way, you aren’t coming back to the book fresh. So I polish as I go, because that’s the only way to forget what I’ve written as I write it. And that’s the entire goal.

The pacing read uncovers most of the problems in the manuscript. Most importantly, it finds pacing problems, thus the name. But it also finds any other sort of development problems, the most important of which are plot and character issues. I also note down any copyedits I see.

After I’ve finished the read, I go and apply all those changes. If there are a lot of changes to make, I might break this up into multiple passes, incrementing the draft number each time. The final result is what goes to beta readers.

The laying down period

Once I ship the book to betas, I put it down and forget about it for six months to a year. I write at least one full book during this period, sometimes more. After this, I come back and do another pacing read, and the process starts all over. The output of that read and its changes is my final draft for submission.

So that’s the process. Now let’s talk about some of the specific techniques.

I’ve developed a shorthand for notating what needs to be done in any given scene or chapter. Broadly, this tends to break down into the following types of revision. This will vary for you, but knowing about these techniques might help keep you on your guard for what to look for. Here they are, in order of hardest to easiest.

Whelp, I screwed up the plot. This doesn’t happen very often. In fact, so far it’s only happened once: in the first novel I wrote. That was a particularly egregious example, where I had to do roughly 60k words of rewrites to replace big sections of the plot. Reasons for this vary, but it usually means I didn’t include enough intention and obstacle.

This is a scene that is fine in terms of plot, but sucks in terms of the actual words and/or blocking. (Blocking is a stage term I use to refer to the specific sequence of actions that take place.) In an in-place rewrite, I put the original scene in another window to the side and rewrite the new scene from scratch. I may borrow some language or even whole paragraphs from the original scene, but most of it gets rewritten. This technique can be surprisingly liberating, and doesn’t take as much time as I expected it to.

This is a new type of revision I had to flag for my sixth draft of my first novel, The Prime Trees (note from the future: this book no longer exists in any recognizable form, even though one of my books has this title). A bunch of chapters suffer from over-revision. I can tell this is the case because the sentences are too clipped, too short, and the description is too shallow. Global smoothing could probably be an in-place rewrite, but in this case the scene isn’t quite that bad. I just need to smooth out the sentences, elongating some of them and adding additional description and connective text.

Oops, I wrote too many words. This doesn’t happen too often for me, and usually when it does it’s happening in some character’s head. Some of my characters are just too wordy in their minds, so the technique here is to find the irrelevant stuff and snip it out. A trim could also apply to blocking and description, but usually doesn’t for me. Some authors (like Brandon Sanderson) just trim their whole draft, but that’s only because they’re always too wordy across the board. I don’t write like that.

This is a continuity error, such as a magic system or timeline inconsistency, where I noticed the problem but did not flag all the places in the text where it occurs. This ranks way up here in terms of difficulty because I have to go through the whole manuscript to find all the problems and fix them. Fixing them is usually easy—finding them is the hard part.

This is like a copyedit, where I’m fixing sentence structure and word use, but it also fixes confusing scenes. Unclear wording, bad paragraph structure, bad description—these things are a global polish. My more complex action scenes often need this.

This is a simple language pass: fixing duplicate words, grammar and punctuation, spelling, all that good stuff. It’s pretty mindless for me, since I’m a natural copyeditor.

This is a continuity fix that I managed to flag every instance of in my notes. This is super easy because my notes will contain the chapter and scene and what to change, so I just have to follow the directions.

When are you done revising? For me, since I don’t yet have an agent or editor to bounce things off of, I call a book done when I’ve completed the laying down period, done that second re-read, and acted upon all the notes that came out of it. I could keep going, laying the book down again, but life is limited and I have other books to write.

So that’s my story. That’s how I revise. How do you do it? What techniques have you developed over the years?