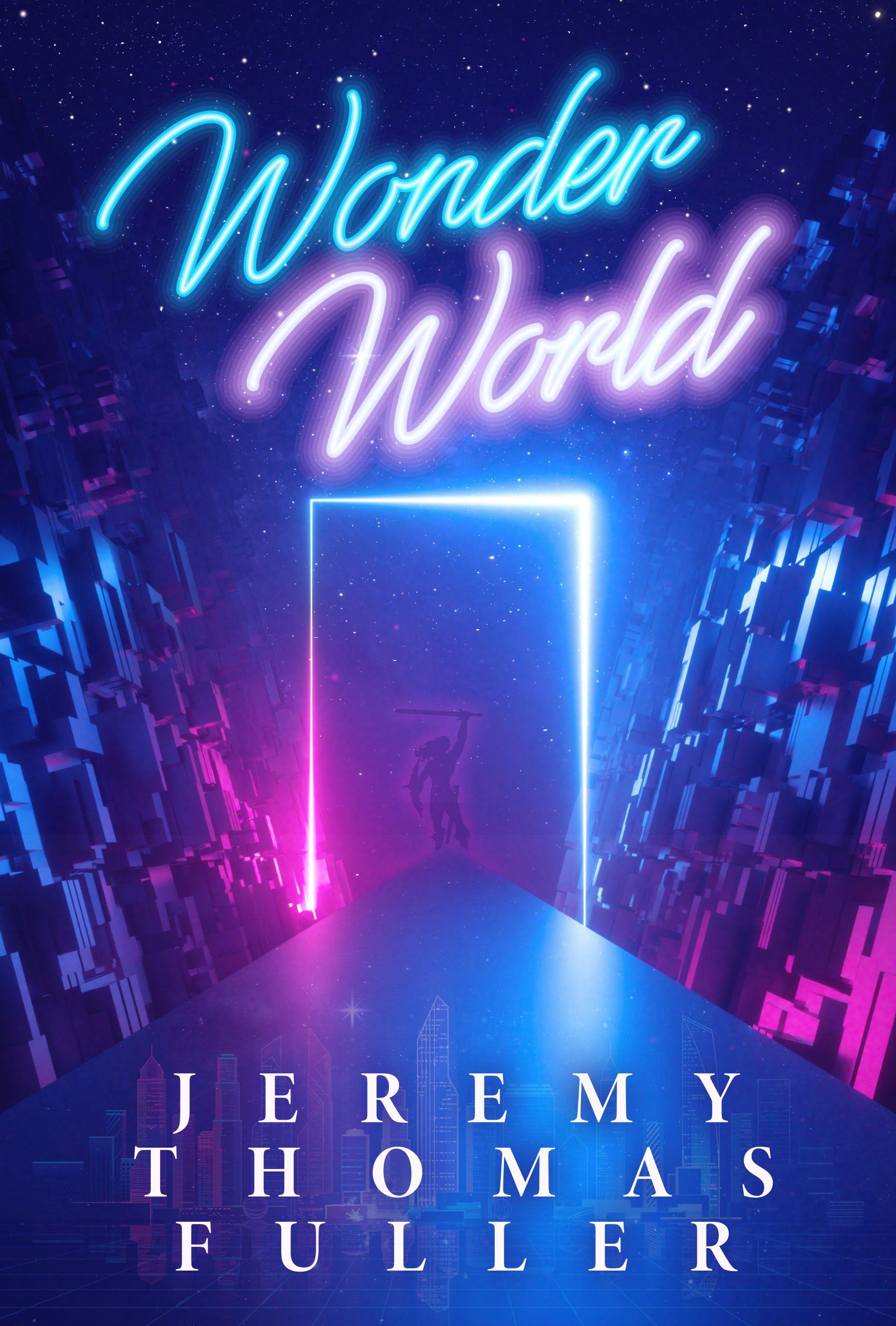 Five hundred years after a botched gene editing attempt nearly wiped out mankind, humanity has finally rebuilt. Only this time, things are different.

This time, we discovered magic.

In the glittering, neon metropolis of Legacy, only the most powerful have access to the power in the pixels that litter the night. Through this magic masquerading as high technology, corporations and the Church vie for control of the human race. Nowhere is this more present than in Wonder World, the amusement park at the center of the city.

Avalon is the greatest video game player in the world. When a beta test of the newest Wonder World ride results in one of the participants dying, he finds himself thrust into a murder mystery beyond his wildest imagination. This isn’t just some random death. This is something bigger. Something new.

This is a fight for who we really are.

Jane was only twelve when she discovered drums were magic.

But she never told anyone. Not the kids in her middle school wind ensemble. Not her friends. Not her parents. When she was drumming along to Sinatra, or Porter, or any of the other Ancient songs, all she would do was smile, and watch the pleasure on the audience’s faces.

Sometimes she wondered if what she was seeing was actually pain.

Now she was late for her fucking session.

She imagined brakes squealing as her driver swerved, their Audi L7 narrowly avoiding a fleet of cars flying at them from straight ahead. Her car curved suddenly to the right, sailing closer to the buildings on that side. They were in the 168th elevation lane, driving a bit on the low side to avoid more traffic. Glass and cement skyscrapers loomed above her, hundreds of stories thrusting into the dark sky. Glittering signs swept by her as they drove: neon restaurant logos, 2D screens, volumetric video advertisements.

A 3D presenter grabbed her through the blackened car window, taking note of her pupil orientation with its high-res scanners and targeting a four-second spot at her just outside the window. She caught a glimpse of a beach, rendered beautifully, waves lapping against a golden shoreline. A travel ad. Great. Then the presenter was out of range, and her car had oriented itself back in the lane, and for a moment she felt a kind of euphoria sweeping over her.

That beach had looked amazing.

She tried to shake it off. Some of the ads did that, and she had never figured out why. More signs were sweeping past her in the night, but she ignored them.

The car lurched, jumping over a car ahead of them. That was dangerous, but her driver knew what he was doing. It was why she used a driver instead of an intelligence. The right human at the wheel could do a far better job than any computer could. She would get to where she was going.

Too bad she was already late.

She cracked open a can of WNDR, feeling the burn of the carbonation as the lemon-lime liquid ran down her throat. She took another sip, relishing in the coldness of it, just as her assistant began to ring.

She swallowed, grimacing as the energy drink burned. “Answer,” she said, and her implant picked up the call.

“Calm down, Mother,” Jane said. “It’s not like you had to rent the studio space.”

“You always do this to me. How far out are you?”

Jane flicked an icon in her periphery, and their route came up. “Five minutes, Mom. We’re almost there.”

“Good.” The call disconnected without so much as a goodbye. Jane took another sip of WNDR, trying not to get angry as the city swept by.

Madison Stellar always had been a bit difficult to work with.

Madison hung up the call, not bothering to hide the annoyance on her face. She could sense her lead ride technician looking up at her from the control surface, probably questioning her. He was always too sensitive. Steve, his name was. Maybe. She gave him a glare and she could hear his position shift, gaze returning to the screen.

There weren’t many sounds coming from ahead of them in Chamber 7. Each of the thirty-six chambers was black, twenty feet long in every direction, with chemical emitters placed at every cubic foot. Right now the room smelled an awful lot like pizza, which was making her hungry.

She knew the chamber held a player, wired up to VR glasses and other sensors, positioned on a motion ramp so they could walk. She expected them to be making noises, shuffling around or swinging their weapon. But right now everything was silent.

She thought he shrugged. “They’re about to enter Ryad Caverns. Looks like they’re just waiting on a party, grinding some trash mobs around the entrance while they wait.”

“They didn’t want to use Group Finder?”

“We disabled it for Live. The idea being that players in the ride would want to group with others in full simulation. Others in the ride.”

Madison let out a deep sigh. “So we need more participants. Didn’t we have four scheduled for this?”

“Carson’s a no-show. We’ll have to get someone else.”

“It’s rush hour. No one will get here in time.”

“We already added Avalon remotely,” Steve said. “We can add another.”

“Why is Avalon doing this, again?”

Steve was tapping one foot on the floor. “He’s the top-ranked Trials player in the world. We gave him beta access to the new expansion, and we promised him a test slot here.”

“It’ll test the software, anyway. You know the marketing is worth it. His stream has at least a million followers.”

“Fine.” She touched her assistant, the screen’s pixels raising as needed to form pictures from the game, statistics and descriptions in braille. Even seen this way—even felt—the new expansion was beautiful.

Three players were battling against the high-level mobs that were scattered outside the dungeon entrance. With her fingers, she watched them—one in particular. Avalon was definitely good. He wasted no time dispatching a Gargouille, the level 120 water dragon making obscene noises as it thrashed about in defeat. The sound was perfect, and she knew the graphics would match. She hoped the players were enjoying their experience.

“I’ll find them a fourth,” she said. “In the meantime, keep monitoring this.”

She felt as Avalon took another swing of his sword, marveling at how amazing his character looked beneath her fingers.

He really was quite a specimen of a man.

Avalon sheathed his sword, bending to loot the corpse of the Gargouille at his feet. Three pieces of glitterweave cloth, one gargoille claw, and twenty-seven gold were all it held. The gold auto-split with the group. The other items went into his bag.

He straightened, looking at his surroundings. The new zones in the Portals of Paradise expansion were all amazing—Stellar Studios’ art department had really stepped up their game—but none were quite as beautiful as this. He took a breath, wishing he could smell the air, wishing he could feel the sun on his face as it percolated through the overgrowth above. He could only imagine the sweltering heat of the jungle, the sweat that would be dripping down his face. He could hear it, though. He could see it.

“Nice job,” XLegolasX said, voice deep in Avalon’s headset. “That self-heal they gave you is super overpowered, though. There’s no way that makes it live.”

“As much as I love it,” Avalon said, “you’re right. Tank classes shouldn’t have this much survivability on their own. Any luck finding a fourth?”

“I’ve been spamming General and LFG,” XLegolasX said, “but so far nothing. I think they sequestered us into our own shard for this test.”

“It would be a lot better test if we could get into Ryad Caverns,” Avalon said. Sunshafts flickered through the leaves, birds flitting to and fro. “Damn,” he said. “They really upped the fidelity with this expansion. The poly count must be off the charts!”

“They had to,” Boomer said. “This new ride is going to be the centerpiece of everything, and it needs to be perfect. I heard the ride system alone cost over a billion dollars.”

“Angels,” Avalon cursed. “That’s a lot of money for one ride.”

“Doesn’t even count the expansion itself. I guess Stellar tripled the development team for this one.”

“Why? You think they’ll make money on all that investment?”

Boomer shrugged. “Beats me. This is Wonder World territory, now. They have endless pockets.”

“Then maybe they should let us into their fucking dungeon.” The swear word was automatically bleeped out, fuzzing into silence.

“Agreed,” XLegolasX said, hefting a giant axe and looking pointedly at a certain tree. “I am sure the game masters are working on the problem as we speak!”

Avalon snorted. He was sure they were working on it, but he wasn’t sure they were listening to their voice chat. Or that they were in that tree. Stellar Studios was far too busy for that.

The Gargoille respawned, and he drew his sword, arm muscles rippling pleasingly as he did. The character model upgrade really was fantastic, more believable than ever. He raised his sword, staring at the water dragon with teeth bared.

Might as well do something to pass the time.