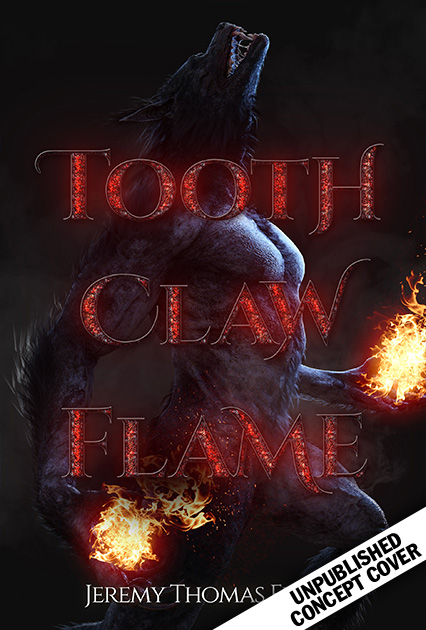 In a fierce jungle world where magic has mysteriously disappeared, a genderfluid human, a humanoid wolf, and a dragon hatchling must put aside their differences and unite their warring species to stop an evil mage intent on returning magic to the world.

In the Wilds, everything could kill. The jungle was a prison. The birds were as deadly as the dragons. And the upright wolves that called this jungle home, well.

They were the worst danger of them all.

In the Wilds, there was no magic—only blood. Only destruction and fear and the thick hot taste of freedom that would never come.

Magic had been lost a long time ago.

Lysa looked out at the world that was her prison, shivering despite the intense jungle heat. Endless trees grew as far as she could see, vines and ferns and pink and purple flowers tracing their way through the vast undergrowth. She heard mice skittering about beneath a layer of dead leaves and fallen branches and moist dirt, bekal flies swarming lazily in the air. The jungle opened up along the river, a vast swathe of vivid blue sky cutting through the trees. The faint outline of Geija, the blue moon, was visible overhead, but she did not take it for the sign of peace that it was meant to be.

She would never find peace in this horrible place.

She clenched her spear in her left hand, hoisted her empty bucket in her right, and took another step toward the water. The Kojo River was hundreds of feet wide and extremely deep, moving far too rapidly to cross unaided. Still, she contemplated it. If she could put the river between her and her captors, maybe they wouldn’t track her down. Maybe she could actually get away. She shivered again, sweat dripping from her forehead.

She remembered what had happened the last time she had tried.

She was here to take some water, nothing more. Hrildr would find her if she took too long. He would find her, and he would… She shivered again. He would do unspeakable things.

She raised her eyes upward, looking at the jungle on the other side of the river. She could see a tree out there, far in the distance. One tree standing out amongst the many, towering far above the jungle canopy. It had to be a thousand feet tall at least, its crown a massive, bobbing sphere of leaves standing stark against the sky. What would cause a tree to grow like that? Why was it so different?

A thought came to her, a fleeting image of a city, flashing metal, dark faces, but it was gone as quickly as it had come. There had been some kind of power there, she knew. She was pretty sure the tree had had it, too.

She just didn’t know how.

She was about to bend, about to finally fill her bucket with the rushing, cool waters of the great Kojo River, when it appeared: the thing she had been most dreading to see. There were many dangerous creatures in the Kalmansa Wilds, after all. Many things that could kill her with hardly any effort. The list of horrors in the jungle was endless, but this was the worst of them. This was what kept her up at night, praying to the Three Moons to keep her safe.

This was a dragon.

It soared in from overhead, effortlessly flying in from somewhere to the south, irridescent scales shimmering in the sunlight as it flew. It was a brilliant purple color, widespread wings held taut to catch the wind. Four arms emerged from its body, sharp claws grasping the air as it winged its way toward the river. Two great eyes regarded her above a long snout, mouth parting slightly to reveal rows of formidable teeth.

“Angels,” she said, the curse slipping from her lips unbidden. She should run. She should hide. She should at least hold her spear at the ready, like she had been trained.

But all she could do was freeze, and falter, and hope to all the Moons that she would live to see another day.

The dragon hovered in the air above the river, at least twenty feet long with a wingspan twice as wide. It stared, eyes piercing directly to her soul, and it was all Lysa could do to avoid fainting right there.

“Ba ad wen ud la,” the dragon said, its voice deep and rich. Then it seemed to smile, sharp teeth shining, and it wheeled its way into the sky and flew away.

Lysa let out the breath she had been holding. “Angels,” she cursed again. “That was close.”

But then she heard a snapping sound, and another creature appeared in the underbrush just twenty feet away.

A kabul wildcat, and it looked hungry.

It leapt right for her face.

The kabul cat could kill her in an instant, just as easily as any dragon could. But facing one was different, for one very simple reason.

Lysa had actually trained for this.

She raised her spear, dropping her bucket to the jungle floor. She kept the stone tip up and out, pointed right at the kabul’s vulnerable stomach. But she also stepped aside, quickly sweeping her body out of the oncoming cat’s reach.

In the Wilds, standing still was never safe.

It sailed past her, black fur rippling in the air, face snarling as it did. She saw it as if in slow motion, eight feet of graceful body and snatching claws and wild eyes streaming past her all at once. She saw saliva dripping from its fangs, saw the hunger in its expression as it missed her, landing lightly on the jungle floor and pivoting for another strike.

Going up against a kabul on your own was usually a bad idea—especially for an ellr like herself. Her body was too scrawny. Her fingers lacked claws. She was too hairless, and nowhere near strong enough to face an enemy of this magnitude. But if she ever wanted to escape—if she ever expected to make it on her own out here in the Wilds—she would have to learn how to survive.

She would have to learn how to kill.

So she held her ground, watching the great cat as it breathed at her, green eyes glowing despite the bright sunlight overhead. There was something piercing about its eyes, almost intelligent. She could swear that it was interested in her, and not just for food.

But then it evidently changed its mind.

It leaped at her again, claws outstretched, powerful legs propelling it almost too quickly to see. But Lysa had seen its muscles contract, seen it project its movement milliseconds in advance. And so she was already moving, this time in the other direction, doing her best to avoid this hurtling ball of teeth and claws.

This time she wasn’t fast enough.

It slashed at her, and she felt searing pain across her abdomen. Her shirt was torn, brown burlap ripped right through, blood soaking immediately into the tattered remains. She stumbled, holding in a scream, trying to keep her spear between her and the beast. It was a shallow wound, she saw, risking a look down at her stomach. She had almost gotten out of the way. There was a lot of blood, but the cat hadn’t managed to fully pierce the skin.

It was only a matter of time before it did.

She held her ground again, jaw twisted in pain and determination, spear up and poised. She could throw it, but she would only get one chance. Her aim wasn’t good enough to trust, not with a spear. If she’d had her bow, but no. She had not thought to bring her bow on a water run.

Cursing her own stupidity, clenching her teeth against the pain, she waited for the kabul’s next strike. But something curious happened instead. The kabul paused, cocking its head to the side, looking at something above her. Was this a ploy? A means of distraction? Kabul weren’t smart enough for that. She risked a glance behind.

And saw another dreadful predator, something she hadn’t seen for years.

It was a sakul bird, small and brilliant white with a pitch black needle-like beak, flitting through the air and heading right for them. Its beak glistened as it flew, and she knew that all it would take was one tap. One peck. One touch. One drip from the venom on that beak and she would die in minutes. And so would the great kabul cat—very few things in the jungle were safe from a sakul bird if it decided to strike.

Angels. This was quickly turning into the water run from hell.

The wildcat wasted no time. It leapt away into the jungle, apparently deciding no meal was worth the risk. Sakul birds weren’t the worst thing in the jungle—not by a long shot—but they were definitely near the top of the list. Evidently the cat was just as smart as it had looked.

Now Lysa had another jungle predator to escape.

Sakul were fast, and they were small. They were virtually impossible to hit with a bow, and anyway, she didn’t have her bow. Hitting it with her spear was completely out of the question, and they were very, very hard to dodge.

Angels. She wasn’t sure what she should do.

She could run, but the bird was clearly focused on her. She could hide, but its eyesight and hearing were better than her own. She could stand her ground, but that would be a death sentence.

She could jump into the river.

But that would be impossible to survive.

Maybe she should just let the damn bird take her.

She watched it as it neared, saw the deadly venom dripping from its beak. And she lowered her spear, preparing herself to finally die. Perhaps now was her time. Perhaps now she could finally find the freedom she’d been searching for.

She looked into the eyes of the sakul bird and felt her heart grow calm.

But an arm took her suddenly, a thick arm covered with thick fur, muscles taut, claws digging into her skin. She smelled it as it came up behind her, muscular body thrusting up against her as it jerked her roughly to the side. Then it threw something—a rock!—and Lysa watched as it sailed through the air, knocking the bird effortlessly out of the sky. Then it was grabbing her, spinning her roughly, trees whirling around her as it did, and she was staring into the eyes of a monster. A wolf, but upright like a man.

Hrildr was standing in front of her, and he looked mad.