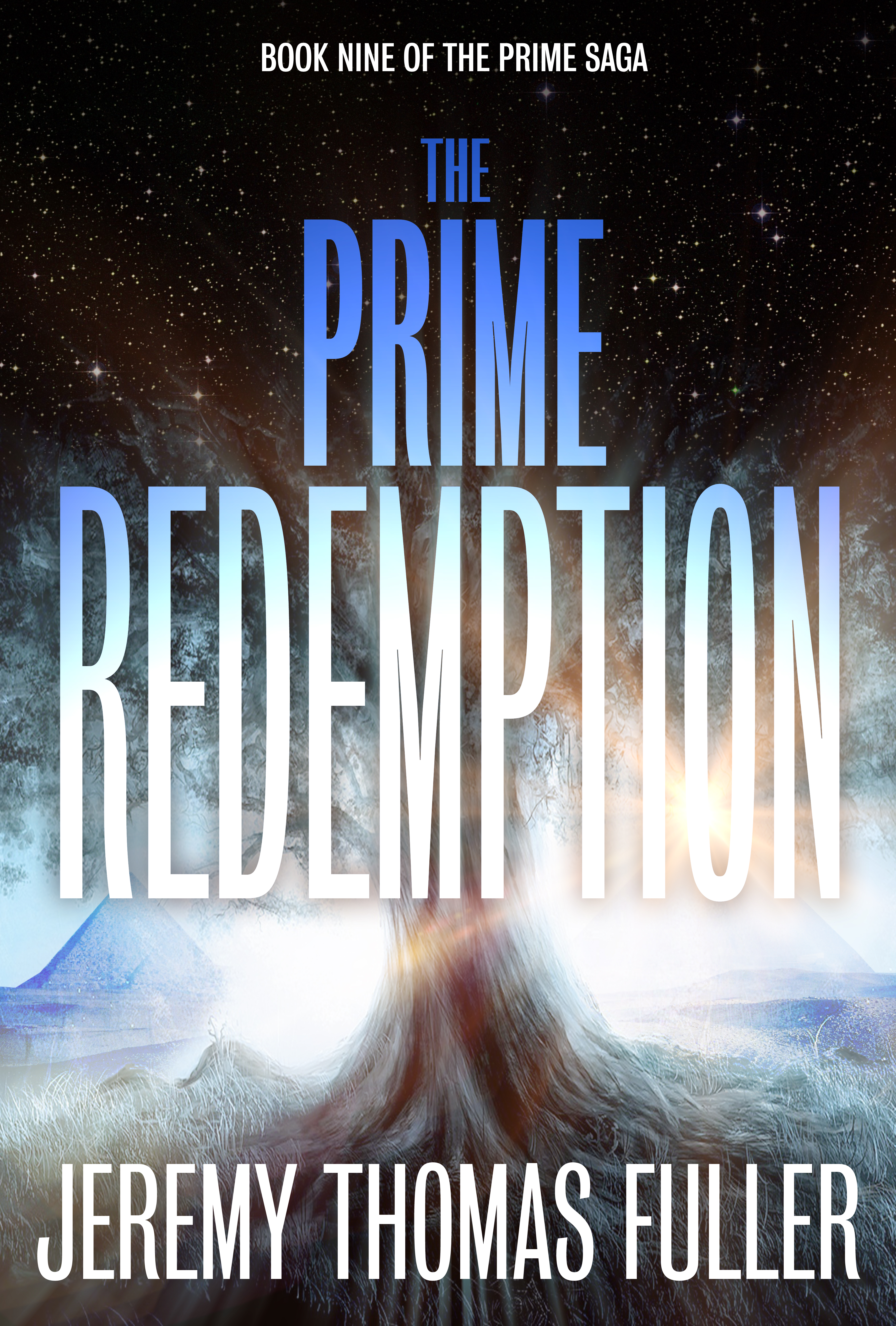 Rylan has gone to speak with Nelenor—an encounter he may not survive. The others discover an incredible secret that redefines everything they thought was true. The Department of Magical Research enacts its plan to trap the Twins, fighting them with ancient weapons of incredible magic.

With the factions busy battling at the Salt Spires, Orym and the others struggle to activate the Pyramid Offensive System. But only Orym knows the true reason for the System’s existence—and what will happen once it’s turned on.

The truth of Aten’s betrayal must be uncovered, his great evil stopped. The fate of magic depends on it.

EXCERPT    This is chapter three. SPOILER WARNING for most of The Prime Saga.

He didn’t seem dangerous at all.

“Ho,” Rylan said, taking a careful step forward. He’d seen what the Twin could do. He’d seen New San Francisco in flames. He knew that one wrong move would mean the end of his life.

And yet he had to try. He had no choice.

He had to do this for Elanil.

“I hope you aren’t come to fight me,” Nelenor said. “It would be a shame to have to kill a superuser.”

“I’m not a superuser anymore,” Rylan said. “And besides, you already tried to kill me once.”

Nelenor seemed to sigh, shifting his weight slightly to one side. “You people are so quick to judge,” he said. “Humans and elves alike, all so eager to see us meet our doom. Yet do you know us? Have you taken the time to talk to us at all?” He pursed his Anubis lips. “You’d think you were not, in fact, Seeds. I would have expected better from sons and daughters of Dragonspring.”

“We don’t know anything about Dragonspring,” Rylan said. “We’re just trying to survive.”

Nelenor dipped his head. “You are succeeding better than I had anticipated, truth be told.”

“We haven’t even made a dent!”

“You dented me. Or that Soul Tree did. I am still not sure what that was.”

“Wait,” Rylan said, taking another step forward. “You don’t know what the Soul Tree was?”

Nelenor shook his head. “The souls here do not work the way we were used to on Dragonspring. There, our own souls communicated with the devices directly—something almost none of you can seem to do. But you are young, and untrained—perhaps you simply need more time.”

“You didn’t use Trees on Dragonspring?”

Rylan took another step forward into the clearing, staying wary for any sudden moves. Nelenor seemed content to talk, for now. Perhaps the Twin just needed a friend.

“We did not have Trees on Dragonspring,” Nelenor said, “at least not in the same manner as you. Perhaps our climate engineering was to blame. Perhaps it was the near-immortality our scientists were able to achieve for humans and elves alike. But I don’t think that was it. Actually, I think it was the dragons.”

That had been a lot of new information. “Humans and elves?” Rylan asked.

“Both species were on Dragonspring,” Nelenor said. “How else do you think we Seeded you both?”

“I’ve heard of dragons, but only in myths. A book Con had—it showed pictures of them. But they aren’t real, at least not on Earth.”

“We did not Seed all species to all Seed Planets. The rylak, for instance—we did not wish them to coexist with the other races. Their propensity for violence was too high, especially in the absence of advanced mitigation technology. It took us many millennia on Dragonspring to bring them into a fruitful relationship with the other peoples.”

Rylan had seen rylak before, on Valaralda in the desert. “It seems to me that you harbor a great love of life,” he said. “Why exterminate so much now? Why are you so violent?”

Nelenor gave a great sigh. “Sometimes even the most enlightened beings succumb to emotions. Even the most powerful make mistakes. Especially those.”

“You just needed to learn control. Given time—and far less time than you think, for one with such ample aptitude as you—you will be fine.”

Welcome to Xyclami, the machine’s voice said in his mind. Your blood sugar is below recommended norms for your species.

Transmuting is one of the granted power divisions, Xyclami said. Please activate your sparkthread with instructions.

“Uh,” Rylan said, and he Willed a branch on the ground to turn into a can of baked beans.

“I’d almost forgotten how much I hate being a superuser,” Rylan said, bending to pick up the can of baked beans. “Do you have anything to open this with?”

Nelenor gestured with his hand, and the top of the can flicked open. “Why do you hate it?”

“Xyclami,” Rylan said, digging into the can with his fingers. “It talks way too much.”

“Damn,” Rylan said. “I could have done that the whole time?”

“You missed basic training,” Nelenor said. “There is much I can teach you, if you do not fight me.”

Rylan ate another bite of beans, fishing them out with his bare fingers. They tasted good, if a little cold. He was starving, as it turned out. He’d just been too nervous to notice.

Things with Nelenor were not quite going as he had expected.

“Where are the dragons now?” he asked.

“I’m afraid I do not know,” Nelenor said. “Some pieces of our reality were lost during the escape, and the machine we built to reclaim them is long gone.”

Another machine. Another device with technology far beyond anyone’s wildest dreams. Was it as powerful as Guruthos? Did it create a form of magic, a power that mere mortals could barely comprehend? Rylan shuddered, thinking about it. Guruthos was bad enough. Magic was powerful enough.

He thought perhaps reality should win.

“I wonder why we have myths of them here,” he said. “Dragons, I mean.”

“The original Seeds must have retained that memory,” Nelenor said. “I would guess that all Seed Planets harbor with them imagery of dragons, whether or not the species itself actually exists.”

Nelenor shifted his position slightly. Rylan flinched, but the Twin was only getting comfortable on the ground. Was it his imagination, or had the Anubis figure grown smaller as they talked?

“I grow weary of fighting,” Nelenor said. “But yes, I still do very much want to find the Imprisoner.” He cocked his head to the side as if listening to something. “Ah! Velion has felt him on Valaralda. I must go.”

“You can feel the Imprisoner?”

“He is hiding himself, somehow. Only rarely, when he lets his guard drop for a moment, do we feel him. His soul is connected to ours, you see. His and the one who unlocked us.”

“Yes. Those two will always share reality with us, connected across time. That is what the Prison magic does.”

“I see.” He didn’t see. But it seemed good to keep Nelenor talking, to extract as much information out of him as he could—even if he didn’t understand it all. “So you’re leaving?”

“Yes. I must find this Imprisoner, and make him pay.”

“Why? Are you really the vengeful type?”

“I—” Nelenor actually seemed at a loss for words. “I must go.”

“Is the Imprisoner named Orym?”

Nelenor nodded. “A woman named Lorelei told us this.”

So it was true. If Orym was the Imprisoner, it meant he had to be at least a hundred thousand years old. It also meant that he was a very different sort of person than anyone had known.

But as Rylan thought of it, he realized that perhaps it wasn’t so unexpected. Orym always had been callous, focused on science and discovery to the exclusion of everything else. He’d never been particularly nice to anyone. And hadn’t Dill said that sometimes there was a little too much of his father in him? That his mother, Tiala, had left because of it?

Pieces were beginning to fall into place.

“Are you coming?” Nelenor asked.

“Will you tell me about the Imprisoner?” Rylan asked. “What happened between you so long ago?”

Nelenor sighed. “I will tell you, little one, but then we must be away. I only do this because you are a superuser, and so you are owed certain rights and privileges.”

It seemed as if Nelenor might even respect him a bit. That was certainly the last thing Rylan had been expecting.

Xyclami, Rylan thought as Nelenor began telling him the story, can you send my friends a message?

Rylan kept an eye on Nelenor, wondering if the Twin had heard his exchange with the machine. It seemed, for the moment, that he had not.