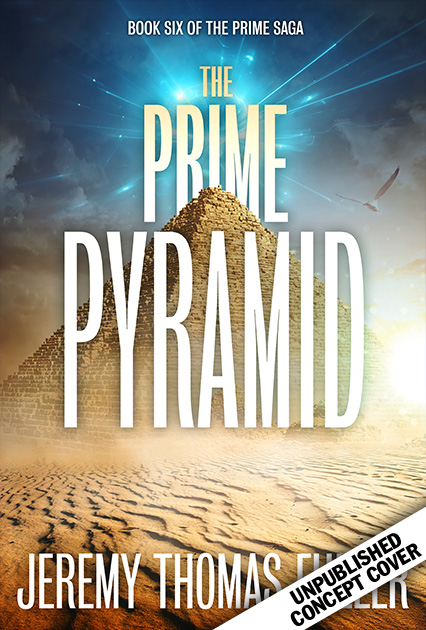 The Cothellon were defeated, but now a new threat has arisen. The Fall is coming, and with it the end of the galaxy.

Trey and Arra are set adrift on the elven home world, the planet Valaralda. Trying to rekindle their long-forgotten relationship, they must journey to places not seen in a hundred thousand years. Orym has a quest of his own, deep underneath the oceans of Earth, investigating rumors of Atlantis reborn. And Rylan meets a new friend, an old lady who tells him the most interesting story.

But the Fall is coming, and it will destroy everything in its path.

EXCERPT    This excerpt appears near the beginning of Allain’s viewpoint sequence.

Allain looked at the ground far below his dangling shoes. From his vantage point atop the New Eiffel Tower, he could see all of New Paris. The sky city sparkled at night, glowing with old-world charm. The Cothellon architects had done a masterful job replicating Paris up here in the sky. There was even a Seine of sorts: a thin band of water wound its way through the city, cutting through the Arrondissements with something that almost approached the romantic glamour of its namesake on Earth’s surface. It was a closed system—the water was continuously recycled and purified, flowing across the city in endless loops.

The original city of Paris was a ghost town, of course. Allain hadn’t visited—why would he?—but he knew what it probably looked like. He’d been to Old San Francisco. Derelict buildings would rise like infernal monuments to an age long forgotten. Weeds and trees and torn up roads and abandoned cars would be everywhere, and the only sounds would be those of nature, who had come back to claim her home.

It would be far too depressing to visit.

But New Paris—New Paris was a delight. Allain loved it up here atop the New Eiffel. He and Allain2 came up here often, just to sit and watch and think. He found it relaxing.

He could see all the way out to the edge of the city, where the New Golden Gate Bridge joined New Paris with New San Francisco. It was ironic, in its way: San Francisco had sometimes been called the “Paris of the West”. It was somehow fitting that it would be physically joined to Paris now. With the old Earth dead and returned to nature, these United Sky Cities were the only real reminder of what humanity had achieved, so long ago.

Lights suddenly flashed on the tower, shining brightly in the night sky. The New Eiffel Tower did this display every night, and people came from miles around to picnic in the lawn below, drinking wine and watching the lights. Allain found himself wishing that Arra could be here to see this. She’d never been to New Paris, not that he knew of. She’d never seen its beauty. He longed to take her up here sometime.

Allain smiled faintly to himself, thinking about her. He visualized her—stunning, strong, deadly. The most beautiful girl he’d ever seen. But then he pictured her in Trey’s arms, and his mood soured. Trey: the bastard who’d stolen Arra from him.

No, no, that wasn’t right. Trey wasn’t bad. Allain saw Allain2 glaring at him, as if reading his mind, and Allain felt the anger slip away. It was almost as if his twin had taken it from him, in that one look. Allain took a deep breath of the crisp night air. The stars sparkled as if to match the tower, and all was right with the world for a moment.

Trey was a nice guy. Allain could admit that, at least. And Arra didn’t love Allain. Never had, if he was being honest about it. He sighed wistfully and swung his legs up onto the platform. It was time to give up on her. Time to move on.

“The bros are back!” Shot shouted as Allain and Allain2 walked into Shock Crew headquarters.

“Ho,” Allain said. Allain2 was glowering, as usual, but Allain wasn’t fooled. He knew his twin loved it down here in the Framework.

Shock Crew had expanded. With the Department of Civil Service gone, the kids had been able to break down some walls and take over several neighboring rooms in the city Framework. The story of the last battle against the Cothellon had become legend, and Shock Crew had found itself inundated with framekids from all over the United Sky Cities. Everyone wanted to be part of the crew that had helped overthrow the oppressive government.

At first, Allain had wondered why the kids didn’t move out of the Framework. It didn’t take him long to realize why: there was a certain camaraderie down here, a certain feel to the place. Kids were everywhere—self regulating, self-subsisting, and generally just free. They liked not having adults around to supervise, and Allain agreed. He felt more at home here than he ever had in Sylrantheas.

“Anything new?” Shot asked as they walked through the water treatment plant, ducking as framekids threw stuff at them.

“Just this Fall thing everyone is talking about,” Allain said.

Shot grunted. “Just when we thought we’d saved the world, here comes another disaster. Do you believe it? Will the Fall destroy the universe?”

“I don’t know anything about it,” Allain said. “But after everything I’ve seen this past month, nothing would surprise me.”

Someone whistled at them, catching Shot’s attention. A tall, spindly teenager ambled up to them, all elbows and knees.

“Got some new ones in from New Sydney,” Stick said. “Where should I put ’em?”

Allain wondered if there were any girls in the new group. Sydney girls were different from the ones he was used to. They were more raw, more energetic. He’d managed to sack up with a few of them, and he wouldn’t have minded another go.

Shot pursed his lips. “We got no more room down here, dammit,” he said. “This keeps up any longer, the whole goddamn Framework will be one Crew.”

“Would that be so bad?” Allain asked.

“Might not be, but where the hell am I gonna get enough space for all that?”

Allain shrugged. It wasn’t a bad problem to have.

“Put ’em over in Power Storage Four,” Shot said. “And see if we can extend the scaffolding in there further down.”

“You got it, boss,” Stick said, turning and loping away.

Shot watched him go. “I swear,” he said, “that kid eats more than any two of us put together, but he’s still the skinniest damn thing I ever met.”

They continued walking down the center of the room. A piece of wadded up paper hit Allain in the chest. He caught it and threw it up into the rigging. That earned him a whistle.

“How long you planning on staying this time?” Shot asked as they walked. Two kids were playing catch with an old ball of some kind. The thing was so dirty it was nearly unrecognizable. Allain ducked as the ball hurtled through the air, right where his face had been.

“And you?” Shot asked Allain2.

“You two always gonna stick together?”

“Alright,” Shot said. “You been down to Pano Sylrantheas lately?”

Shot shrugged. “Just curious is all. I hear lots of humans are settling there.”

“Getting tired of dirty boys and cement?”

“It’s not all it’s cracked up to be,” Allain2 said. “Spend fifty years there and get back to me.”

“What are you talking about?” Allain asked. “You haven’t even been alive two months.”

Allain2 glared at him. “I have all your memories, idiot.”

They arrived at their destination: Dill’s old tent. Shot had taken it over, now that he was in charge of Shock Crew. His team of officers had grown. The logistics for feeding four thousand kids was a massive job, even with government handouts. Shot had the kids farming down here in the Framework, growing stuff in hydroponic gardens. It kept them mostly out of trouble, and helped with the food problem.

The tent had been enlarged, too. Shot and Allains stepped inside to a whirl of activity. Grime was there, directing operations. A small team of “engineers”—the kids liked to call themselves that—were huddled over a table, discussing plans to enhance the vast scaffolding in the battery rooms. Spike was speaking urgently in a radio, her spiky hair bobbing as she yelled and gesticulated.

“Nah. He’s over on Valaralda, doing Frame-knows-what. Last I heard, he was going into some kinda desert.”

“Beats me,” Shot said. “All good?” he asked Spike, who had gotten off her radio.

“Buncha untrained idiots,” she said, but she was smiling.

“You weren’t much better yourself a few weeks ago.”

“I’m a quick study. Quicker than the damn kids you keep giving me.”

“We fighting a war I don’t know about?”

“I know you think these new framekids are all fine,” Spike said, “but I guarantee you some of them will be trouble. This kinda peace won’t last.”

“Always looking on the bright side, eh, Spike?”

“Shut up.” Her radio blared again and she turned away.

Shot grinned at Allain. “She loves it,” he said. She had a funny way of showing it.

Spike turned back to them suddenly, a concerned look on her face. “Someone’s coming, boss.”

“No,” Spike said, “someone else. An adult. An elf.” She glared at Allain as if it was his fault.

“Battle stations!” Shot said, and Spike began speaking rapidly into her radio. Shot turned to Allain, a wide grin on his face. “I’ve always wanted to say that.”