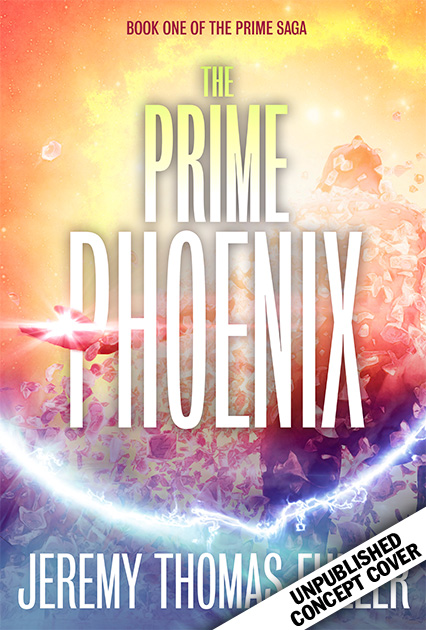 The Prime Saga: Book One

Phoenix is an assassin. A mage. And a heaping puddle of anxiety, what with all the murder and mayhem all around. She lives in the undergirders of a flying city, stuck amongst the sewers and the homeless and the trash. All she really wants is to escape topside, to feel the sun on her face.

When a panic attack causes her magic to destroy government property, Phoenix is banished from her home and marked for assassination. The underworld is a frightening place—until she meets a band of flying racecar drivers, who make their living stealing magical metalwood and trying to overthrow the government.

Phoenix discovers a horrible secret: her father, whom she thought was dead, is actually working for the government. He's a mage, too, and he's been mind controlling the entire city to bend them to his will. Now she must confront her father—and build a flaming sword—to end his ruthless control of the city before he ends her life for good.

Only then can she finally feel the sun.

EXCERPT
CONTENT WARNING: This is a somewhat dark opening, including violence and implied sexual situations.

Living in a flying city wasn’t nearly as glamorous as it sounded.

Not when you couldn’t escape.

Deep in the bones of the city, in the undergirding endless night, where sewage and cement fought against the homeless and the rats—that was where Megan and her kind ran. Trashburners rumbled in the distance, underscoring glistening pipes that carried urine, detritus, and—if she was lucky—water. Dim fluorescent lights flickered in the silent halls, leftover spaces that the topsiders had forgotten. Some of them, anyway. The darkest of the rich dwellers overhead? Well. They remembered. There were still pleasures to be found in the turbulent gloom beneath the streets.

Down here, there was magic.

Welcome to the Framework.

Megan stood atop Rafter Two, looking at the whiproom down below her. Rows of metal chairs lined the cement floor, the fearful men and women sitting in them wrapped in chains. She licked her lips, quieting the flicker of her heartbeat.

The Den was a special section of the Framework, where only the richest topsiders came. This room was the worst of them: deep and rotten, filled with the scent of men and fear, of dark blood and anxiety and shame. Metal rafters formed a scaffold twelve feet overhead, overlooking the sounds of what they did here in the whiproom: whips, of course, and harder things. Things she had to keep her eyes away from. Things for which a soul might bleed.

Tonight, she had a job to do. She flitted down from the metal rafter, landing silently beside one of the chairs. Blue lights flickered overhead, revealing flashing necks, glimmering teeth. She heard cries of pleasure and of pain, the crack of whips, the rattle of thick chains.

She wiped a sheen of sweat from her brow.

She could do this.

Queen had entrusted her with the job, after all. And pissing off Queen was the last thing she wanted to do. So she stood, checked the pinblade at her side, and launched herself at Gentleman One.

He was short, for a Gentleman. Short and portly, with a grimace on his face. And so it was the work of but mere seconds for Megan to draw her pinblade, steel flashing quickly in the dark, and swipe it wide, feeling the thin but supple give of flesh. It took no time for her to see the blood well up inside his newly tattered shirt, to see the expression on his face as he stumbled, clutching at the wound, eyes open as he fell to the cold cement floor.

Megan left him there, bleeding.

He’d been whipping a woman, who was still strapped into a chair with thick pieces of leather. Her chest heaved in fear as Megan approached.

“It’s okay,” Megan said, bending to undo the straps. “You’re free now. The exit’s over there.”

“Who are you?” the woman asked, but Megan simply shook her head.

“Count yourself lucky. And don’t get yourself caught up in this again.”

The woman left, tottering toward Exit Two in the northeast corner of the room.

She caught a glimpse of Beam one rafter over, dispatching her first Gentleman. The lights gleamed on her enticingly, shining on her arm muscles, on her neck as it curved while she slit the throat of her first victim. Megan watched as she freed the woman in the chair, speaking to her in low tones.

Beam had always made it look so easy.

“Hey!” Beam hissed, and Megan realized that the girl was somehow standing next to her. “We can’t be discovered here. Go!”

Megan obeyed, her mind a bit of fog. She threw her steelstring up, watching as the thick clip at the end connected with the rafterjoin twelve feet above her. The Planners had built all the rafters like this, with metal loops in the corners of everything. She didn’t know why.

“Up!” Beam said from a few feet away, and Megan felt herself doing what she loved more than anything.

Beam was propelling her with magic. Megan felt herself rise with it, rising upward toward the ceiling, the steelstring taut against her as she did. It was pulling her, the momentum arcing her above the metal rafters into the cavernous space at the top of the room. She sailed in an arc, the rafter keeping her steelstring in place, until she was positioned directly over Rafter Three.

And Megan fell, landing spryly on the metal beam. Easy.

They had practiced that move for a very long time.

Megan unclipped her steelstring, surveying the floor below. Killgirls like her were supposed to stay hidden, to strike from the darkness.

Everything was darkness here.

Her next target was two rows down. Gentleman Two was even fatter than the first, a big fat man dressed in blue, and he had his big hand around someone’s neck beneath him, fat back held still as the body below him jerked and waved, obviously about to die.

And it wasn’t even a woman being held there in the Gentleman’s hand.

Megan reclipped her steelstring, pulling her right glove tighter. Then she swung down, being as silent as possible, angling herself for a quick neck kill. Her feet, clad as they were in simple skintight synthskin, pointed at the man. It would be easy to kill him, positioned as he was, bent over his captive. All she had to do was grab his neck and twist. She could feel her muscles poised, ready to execute the motion she had done so many times.

But then the man looked up at her, white teeth shining.

She let out a shriek, unable to help herself, trying to deflect her motion to the side. But it was no good—all she had was gravity, now that Beam was off doing something else. The man had a knife, much thicker than her pinblade. He had a look of skill about him, as if he had wielded the knife before. He almost looked happy that a black-clad woman was descending on him from the ceiling above, synthskin dangling, steelstring snapping.

Megan saw all this in a moment, and she knew that death was rising up to meet her.

She managed to swing her steelstring to the side just barely, her body moving a foot off to the right of the man and his captive in the chair. But the gentleman was ready for her: he sliced and met her foot, sending searing pain through the synthskin to her real skin underneath. Megan screamed, landing heavily on the floor and twisting her ankle hard as she tried to keep her balance. Her foot felt like it was on fire. It hurt, as if the undersun had flipped the Framework in the sky, blazing down and piercing into her with all its horrible glory.

But she had to be strong. She had to survive. So she came back up, balancing weakly on her other ankle, pinblade out and ready to strike. Then she darted forward, ducking under a wide swipe from the Gentleman and his blade, slicing inside his reach, feeling the slight resistance of flesh and cloth as her sharp pinblade dealt its damage.

The man staggered back, eyes wide, skin white. His blue shirt was sliced cleanly from left to right, the opening revealing skin and blood. The man lurched, grasping at his stomach, dropping his knife. Then he fell, gurgling something in the whip-loud room.

Megan wiped her pinblade on her pants and clipped it to her belt. She stood for a moment to quiet her heart, careful not to put weight on her damaged foot. It hurt, but she could manage it. She’d had worse before. Then she turned, moving her attention to the captive man in the chair.

He was pretty, she realized in a detached sort of way. He had dark, curly hair, and eyes she couldn’t see. The room was dark, and she was in a hurry, and she didn’t go in for men anyway. Her gaze flicked across his well-defined pectoral muscles and abdomen, then back up to his eyes. He didn’t seem nervous. He didn’t seem afraid at all. It almost seemed like he’d been enjoying this.

She stepped closer, reaching under him to unlatch his chains, trying to avoid looking in too many places at once. His breath was hot as he turned to her.

The chains fell away.

“Th—” the man said, his voice coming out entirely as a choke. He coughed, and Megan finished undoing him. Then she stood, watching his veiled eyes in the dim room.

“How did you end up here?” she asked.

“I’m sorry.” She helped him up. When he stood, he was taller than her by at least a foot. And there was something in his eyes, now that she could see them in the flickering light from the ceiling.

“The door is that way,” she said, pointing to Exit Two.

But there wasn’t any rule about telling him her real name.

“What are you doing?” Beam hissed at her from somewhere nearby.

Beam was still hissing at her, and Megan turned to see what the problem was. Had she dispatched her Gentleman? Had they completed their mission? Could they leave? Megan turned and scanned her eyes across the whiproom, trying to take stock of what was going on.

Everyone had stopped what they were doing. Every Gentleman was standing, leather whips in hand. The blue fluorescent lights flickered as they gleamed off skin and metal, everything sharpness and slickness and steel.

They were all looking at her.

They were all smiling.