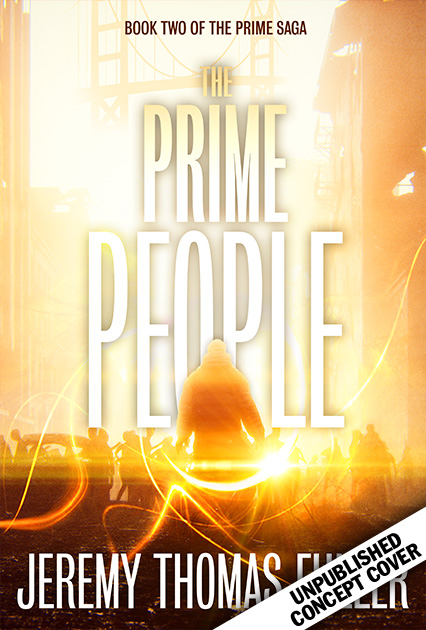 The Framework is not what it once was. With Queen gone, the various Crews war and fight for resources, laying claim to whatever they can. Now a monster has arrived, wreaking havoc and drawing Phoenix and Beam away from their Crew. The monster leads them to the strange huntroom and its whirling lights, and soon they find themselves on the surface of Earth with no way back home.

Here they meet the People, the brutal remains of humanity, at war with a mysterious race of people who call themselves elves. Soon Phoenix and Beam find themselves embroiled in this war—but are they fighting for the right side? And does the enigmatic woman who leads them really have their best interests at heart?

EXCERPT    This is a scene from the cold open.

Segena paced along the scaffolding, feet bending the wood slightly with every step. The height didn’t bother her—or the depth, rather. Just on the other side of the scaffolding was a three hundred foot pit.

“Mistress,” Bagkag said, face red as he climbed up the side of the scaffolding. “We didn’t know you were coming today.”

“I told you not to call me that,” Segena said, rounding on him. “And I will come here any damn time I please.”

Bagkag puffed. “Apologies, Mis—Segena. If you had but warned us, we would have been sure to have refreshments ready for you. As you can see, the men are hard at work.”

“Not hard enough,” Segena said. Sweat was dripping down the ruddy man’s face, running tracks through the dirt on his skin. “And you of all people should know I don’t need refreshments. Call the dig chief.”

“Really,” Segena said, “must you always use that rotten language of yours?”

“Tell me,” Segena said, looking out into the distance at the mountain beyond, “why do you not fear the volcano?”

The island of Stromboli was almost entirely made up of it, a mountain rearing up from the Tyrrhenian Sea like the fist of a god. Even now, smoke was rising from its tip.

“We have lived here for hundreds of years,” Bagkag said. “Stromboli is like an old woman, always muttering complaints. She is no cause for concern.”

And besides, they were digging on the edge of the island, closer to the sea. If the volcano did erupt, they’d have warning.

“Why do you not use a sea vessel?” Bagkag asked. “This underwater city you seek—surely you could swim to it with your great magic?”

“I’ve already told you,” Segena said, “I don’t have a submersible. Your people saw fit enough to let them all rust. And even if we did have one—could you drive it?”

“But your magic, Great One.”

“I told you not to call me that, either.”

“My magic is none of your business,” Segena said. “I’ll thank you to let me conduct affairs as I see fit. We dig. We’re close. If my calculations are correct, Aten left an access point here, underneath Stromboli. We just need to dig a little further.”

“Dammit, Bagkag, how hard is it to use my name?”

“Segena,” he said, huffing. Were none of these men in shape? “We are at 93.44 meters presently. A little behind schedule, but if you would bring me more men, we could—”

“No more men,” Segena said. “I don’t need anyone else knowing about this little project.”

Kenjeb bobbed. “Yes. Of course. We are happy to do the work.”

She was certainly paying them enough for the trouble. “How many days until target depth?”

Segena looked at the sky, squinting against the setting sun. Six days. It should be enough. “Good. We then progress as planned, due south for one hundred fifty meters. And Kenjeb—I want this done on time. Everything depends on it.”

The scaffolding shook, suddenly, nearly throwing the three of them off into the pit. Segena found herself clutching the side rails, knuckles white. That had been unexpected. Was the smoke plume from the volcano thicker, or was that just her imagination?

Segena stared at him. “If there’s one thing I’ve learned in my life,” she said, “it’s to respect nature. I need this dig completed, and I need it done now. Get back to work.”

And Segena stared out at the volcano, wondering if they would have enough time.

A gate flashed into existence on the platform next to her, and Zel strode through. “How’s it looking?” he asked.

Segena smiled at him. She couldn’t help it—he was gorgeous, tall and slim and muscular and not nearly as dirty as these other humans. Dark hair cascaded down his back in proper jata form—what the older Earth had called dreadlocks. He looked good. She was proud of him.

“You were supposed to be in Gulthurub.”

“I was there,” Zel said. “I thought maybe you’d like a ride back. That is, if you’re finished here?”

Segena gave the volcano one last look. “I’m finished,” she said. “I don’t think my yelling will do much good, in any case. They’ll get it done when it’s done.”

“I wish you’d tell me what you’re looking for,” Zel said. “Maybe I can help.”

Segena laughed, the sound harsh in her own ears. “I wish you could,” she said. “I really wish you could. Let us return. The People will need us.”

“Right this way,” Zel said, stepping back through the swirling gate.

The spider on Segena’s shoulder crawled back into her pocket as she felt the darkness and light shimmer over her, her feet crunching on hard gravel. Then she caught a nearby bird and the world resumed its existence around her.

She was back in Gulthurub. 7000 miles in the space of a thought. Around them, the People were preparing for war.

The pieces were finally coming together.