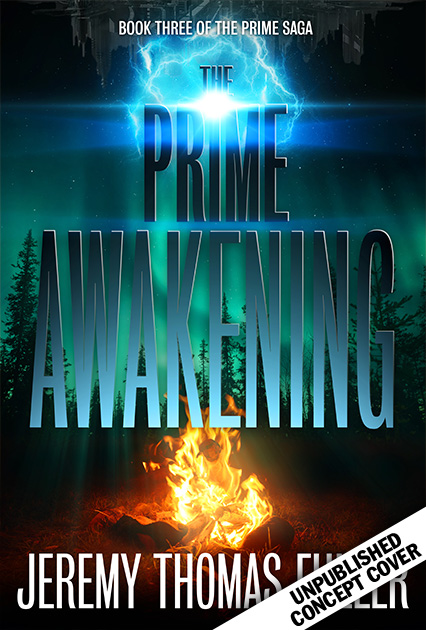 Three hundred years after humanity was almost destroyed by an alien race, the few humans that remain are enslaved in flying cities. Trey is among them, a bookseller in the sky city of New San Francisco. Bewildering dreams come to him, visions of a past life he can't remember. One day he joins a resistance group, wanting to take back the city from the aliens who control it.

That's when everything goes wrong. A fight breaks out, the police shooting magical guns that can tear through metal. The city breaks apart, sending Trey and the resistance through the bottom of the city, falling three thousand feet to Earth's surface. He survives, thanks to some unexpected magic, and comes face to face with something he had not expected: an alien.

One of the most beautiful women he has ever seen.

She is Arra, and she was born after the atrocities that locked the humans away. She seems shockingly familiar—but how is that possible? Now Trey and Arra are in a fight for their lives against the vicious humans on the ground, the ones who somehow escaped enslavement in the sky cities. Now they must also confront the secrets of the dark aliens who built the cities and decimated humanity—and rebuild their own relationship that was somehow hidden in the past.

EXCERPT    This excerpt covers two chapters toward the beginning of Trey’s viewpoint.

The sun sent shimmering yellow rays behind the last two shards of the Golden Gate Bridge, thrusting upwards from the water as if pointing at the stars. But there were more than stars up there, Arra knew, shielding her eyes from the glare as she scanned the sky. New San Francisco was up there somewhere, still shielded by dark magic. Sometimes it left a shadow or a glimmer. Sometimes she thought she could hear the faint sound of sirens up above.

Sometimes she thought they were screams.

But today, she had other concerns. The Remnant party was somewhere down below them, slinging their way through the Old City. Arra picked her way through the overgrowth at the base of the crumbled ruins on Telegraph Hill, hoping to spot movement down below. This tower had been called something, once. Cloyt? Coit? The old names had never made much sense to her. She scanned the City, but nothing moved.

The Remnant scavengers were gone without a trace.

“Arra!” Elanil shouted from somewhere up above. Her sister was leafrunning around the tower, pirouetting and pliéing as she flew through the air, elm dust blowing out behind her.

Her words were lost in the wind coming in from the Bay. Where had everyone else gone? Fenian was somewhere down below, and she’d lost Imra in the trek up the hill. She glared at her sister again. Elanil was bouncing around the end of the angled tower, darting between broken chunks of yellow cement, making magic look easy. Like child’s play.

Imra appeared, breathing heavily, her face flushed. “Why,” she gasped, “do you always do that?”

“Only when I win. See anything?”

“I think Elanil did.”

“Fenian went on ahead. Didn’t say why.”

Arra shifted the bow on her back. It was a recurve, one of the bows from class—her longbow was way too big for this kind of hunt. It would be bows and arrows against machetes and guns—just the kind of fight Arra liked.

If they could catch the damn Remnant.

“The Hunters are coming, you know,” Imra said. “They’ll want to know why we went out ahead without them.”

“Kharis can get over it,” Arra said. “After this week, it doesn’t matter.”

Elanil dropped to the ground right in front of them, wood dust sprinkling in the air. Some of it got in Arra’s mouth; she spit it out furiously and glared at her sister. “Father would ground you if he knew what you were doing.”

“Oh?” Elanil smirked at her, twirling her hair with a finger.

“Unnecessary use of magic.”

Elanil pouted. “I was just getting a better vantage point.”

“We don’t have enough primewood for vantage points,” Arra said. “Don’t you remember? Father’s always lecturing us about it. I can’t even use the stuff, and I know that.”

“Yeah, yeah. That’s why we’re out here, isn’t it? To take back our primewood?”

“Why did they steal it?” Imra asked. “It’s not like the Remnant can use it for anything. Have they ever taken wood from us before?”

“I wonder what they want it for?”

She pointed. “Movement down there, in Washington Square. Pretty sure it was them.”

Arra followed her finger. The park was a jungle, now, very different from the metal graveyards where the Remnant usually lived. She unshouldered her bow, checking the pouch around her waist. It looked like a primewood pouch, but it only held medical and fletching supplies. There was no reason for Arra to carry primewood, after all.

She wasn’t a mage.

“Let’s go get them,” she said, pulling an arrow from her quiver. “Has anyone seen Fenian?”

Then she heard a sound from the bottom of the hill. It made her blood curdle and her stomach drop.

Somewhere down below, the man she loved was screaming.