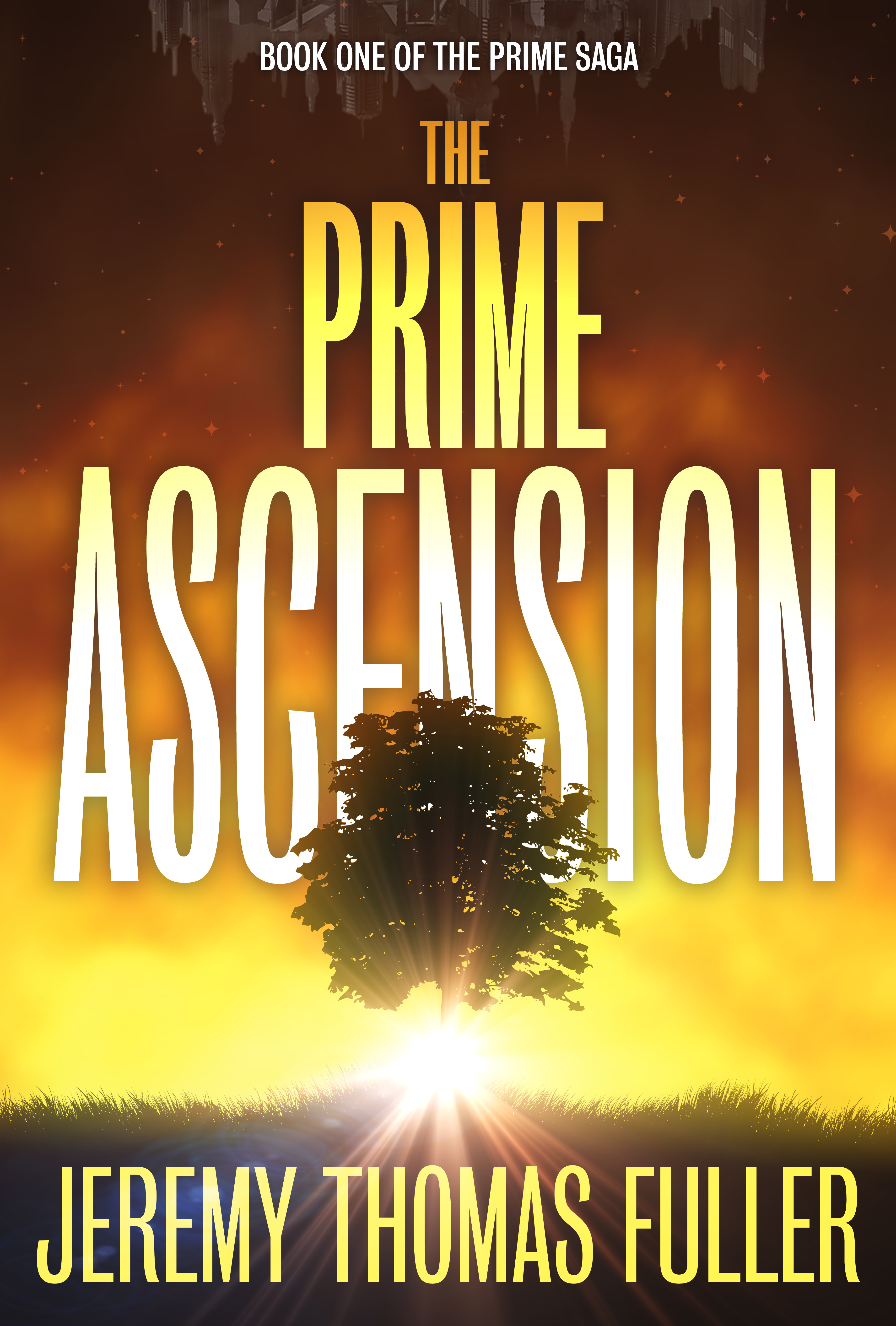 The Prime Saga: Book One

Jessica’s son is dying of cancer. When the largest storm to ever hit San Francisco wipes out nearly half the city, mysterious beings appear, healing the humans that survived. Jessica knows that these strange, magic-wielding people are the secret to healing her son, but she can’t reach them. Still, she must search. She has no choice.

Eventually, she succeeds. But it turns out that the people who saved San Francisco are not exactly who they seem. They aren’t human at all. And they aren’t here to save humanity.

They’re here to destroy it.

This is the story of how the world ends.

When the world ended, it wasn’t because of us. It wasn’t war, or poverty, or disease, or famine. It wasn’t an alien invasion. It wasn’t even our warming climate. No meteor struck us, no supernova obliterated us with gamma rays. It wasn’t a supervolcano. It wasn’t the aging sun.

It could have been any of those things.

We could have destroyed ourselves.

But the world, as it turned out, was actually destroyed by Trees.

Jessica surveyed the city skyline, watching the fog rolling in from the Bay. There was something unnatural about it, as if the fog had developed thoughts, personality. She imagined it floating there malevolently, reaching with grasping tendrils for poor, unsuspecting victims on the ground. She imagined how cold it would be. How empty.

Lately, emptiness was all she felt.

She turned, wiping a tear from her eye as she looked at Jason in the hospital bed. So small. So frail. So much had happened to him so fast. She still knew so little of what was going on.

A man was standing in the door. A man in a suit and white shirt, carrying a tablet and a clipboard. It seemed redundant to her. She blinked, trying to come back to herself. Why was the room so cold?

“Of course.” The man bobbed his head. “I meant no offense. My name is Doctor Chanchorn. I’m the oncologist assigned to your case.”

The doctor bobbed his head again, but his eyes were looking at the television perched in the corner of the room. He flicked them back to her, a thin smile on his face. The air was growing colder. “I have your results, Mrs. Lim. Would you like to sit down? We can do this in my office.” His eyes went to the TV again.

“No,” Jessica said. “You can say whatever it is right here.” She had waited long enough. She had seen enough doctors. She had had enough confusion for a lifetime.

“You can call me Jessica.”

“Jessica.” Doctor Chanchorn pursed his lips. “I’m afraid your son has melanotic neuroectodermal tumor of infancy. It’s a rare form of cancer that we almost never see in children his age. The tumor is in his jaw. It would have been curable with a subtotal maxillectomy, but the tumor is well advanced.” He paused for a moment. “I’m afraid there is nothing we can do.”

Jessica barely heard the words, barely understood them. She felt the floor sinking beneath her. All the tests. All the waiting. All the fear. Her heart had felt for weeks like it was on the verge of breaking, and it would only take the drop of a pin to make the final cut. She felt her world grow gray like the fog over San Francisco.

“I’m sorry to be so straightforward,” the doctor was saying. “We can discuss all this in much more detail. I know this must be a terrible time for you. We can certainly try the surgery, but the odds of getting the entire tumor are not—”

He was looking at the damn TV again.

Jessica turned to follow his gaze. What was that on the screen? She batted at a tear, then fumbled for the remote to turn the volume up.

“—have reported lower pressures than originally expected,” the reporter was saying. “Current models”—the reporter shifted his papers—“current models have the storm making landfall…this can’t be right.” He looked offscreen, his eyes frantic. He seemed to listen for a moment, then returned his gaze to the camera. “Viewers, Typhoon Velma has just been upgraded to Category Five, with barometric pressures projected to break the previous world record set in 1979. The National Weather Service is issuing an immediate mandatory evacuation warning for the entire Bay Area, including the city of San Francisco. Affected areas should be scrolling at the bottom of the screen now. I urge you: get to safety. Do not wait.

“This storm is like nothing we have ever seen before.”

Jessica glanced out the window again. The fog was darker, now, almost black. That wasn’t right. Was it really alive? Was it there to kill her son before the cancer could take him away? She looked at Doctor Chanchorn, seeing fear written on his face.

Was this the day they were all about to die?

Orym leaned into the steering wheel of his Mazda CX-9, wondering why in the hell the sky was so black. He hadn’t checked in with Meteorology in quite some time, but surely the sky shouldn’t look like that. A car whizzed by him in the left lane and he flinched, surprised. He shook his head. He didn’t have time for this.

The radio on the dash was fuzzing, playing nothing but static. Radio. Outdated technology. Still, it had its purposes. He could skip the radio, call his team, get an instant briefing. But a perverse part of him wanted to do things the old fashioned way, the way everyone else in this Twins-forsaken city did it.

He wanted to get the weather from the radio.

He turned the dial as he drove, hearing the clicks and buzzes as the antenna picked up the terrestrial noise in the air all around them. Then it landed on a station, and Orym settled in to listen with grim satisfaction.

“An evacuation has been ordered for the coastal region of Northern California,” the voice said in its gravelly tone. “Tolls have been suspended on all bridges in the Bay Area, and the Golden Gate Bridge has been closed, as Marin County is especially at risk. Everyone is urged to take an overnight bag and head east as quickly as possible. Typhoon Velma is still strengthening as it approaches, and it is projected to make landfall in less than four hours. Again: this is a lethal storm, currently reading as the strongest storm ever to hit the Pacific coast since we’ve been keeping records. Do not wait. You must leave now.

“May God have mercy on our souls.”

Orym clicked the radio off, grimacing. Humans and their gods.

They had no idea what real gods were capable of.

“Mission,” he said into thin air, and the device in his ear clicked.

“Sylvis,” Orym said, “can you tell me what’s going on with the weather?”

“Where are you?” Sylvis said.

“I’m in FiDi.” The cars ahead of him weren’t moving. “Stuck in FiDi, apparently. Bridge traffic is fucked even worse than usual for 1 PM.”

“You’ll never get out of there before Velma hits. I’ll get a gatesender for you.”

“No,” Orym said, his mouth twisting. “The last thing we need is a light show here. What are you going to do, take my entire car?”

“It’s too risky. How long have we kept this a secret?”

Sylvis was silent for a moment. “Twenty thousand years, give or take a few millennia.”

“We’re not giving up on it now. The Ascension is in two weeks.”

“Fine,” Sylvis said, “but that storm is going to kill you. At least let me send some more people down there.”

“Keep them misted, and we’ll be fine.”

“I’ll do better than that. I’ll send Quynn for a quelling.”

“Is that what we’ve become?” Orym asked. The car ahead of him lurched forward a foot, then stopped. “We haven’t even Ascended, and already we’re wiping minds?”

“Just try to get across the bridge. Alive. I’ll send some people to help. Discreetly.”

“Don’t tell Lorelei where I am.”

Kharis took a big pull of his beer, relishing the taste. It was a Fieldwork IPA, smooth and juicy and not at all like the ale they made back in Sylrantheas. They didn’t have beer nearly this good in the village.

That was why he was here, in a bar on 1st Street with the locals, or at least the people who commuted into the city to work here. He should have been back home, hunting or teaching archery. He should have been doing what his mother wanted him to do: find a wife, have a kid, whatever it took to further the family line. But he’d wanted a day to himself. A relaxing day. A day with a beer and a burger and not another care in the world.

It was too bad the city was so damn foggy.

Lhoris was sitting next to him. His brother was bigger, broader-chested, favoring their father’s side. He could pull a seven foot longbow a hundred times an hour without even breaking a sweat.

Kharis almost spit all over the bar. “I thought you liked IPAs.” He wiped his mouth.

“Shut your mouth,” Lhoris said. “Syndra’s beer is not swill. Kindly refer to it by it’s proper name: beer-flavored water.”

Kharis snorted. “Beer-flavored is perhaps too strong a term.”

“Fine. Water-flavored water. Or maybe I was drinking water. I don’t know. Point is, this beer is weird.”

The bartender distracted him just then, waving a remote so he could turn up the volume on one of the TVs.

“…barometric pressures projected to break the previous world record set in 1979,” the reporter was saying. Kharis perked up. “The National Weather Service is issuing an immediate mandatory evacuation warning for the entire Bay Area, including the city of San Francisco.”

The reporter kept going, but his voice was drowned out by the sudden onslaught of noise in the bar. Everyone was shouting frantically at each other, standing up and fleeing the room. None of them bothered to pay their checks.

Kharis looked at his brother. “Should we leave?”

Lhoris actually had fear in his eyes. “Yes,” he said, “unless you suddenly know how to fly.”

Kharis sighed, taking another drink of beer. So much for a relaxing day.

Keya lowered the chart, scanning the streets below. Her patient was recovering from a particularly nasty dose of chemo, but it wasn’t anything to be overly concerned about. What was happening outside was far more interesting.

The streets were completely filled with cars.

“What in the Twins—” she started, but Rosemary burst into the room.

“We have to go,” she said. “We’re evacuating the building.”

“What? Why?” The sky had an ominous, black look to it. But the weather in San Francisco was never very good.

“Haven’t you been paying attention? The storm was just upgraded. They’ve issued a mandatory evacuation notice for the entire Bay Area.”

“I have patients to see!”

“You’ll see them, Keya. Once we get out of here. Come with me, now. We need to help move patients.”

“Do you see the roads?” Keya pointed out the window. The American Cancer Society was fifteen floors up, but the clogged streets were easily visible from way up there. So was the fog rolling in across the Bay. “We’re never getting out of here.”

“We’re airlifting the most critical cases. Ambulances will handle the rest. We’ve rehearsed this. Come on.”

“Fuck.” Keya looked at her patient lying in the bed. He had slept through the entire exchange. Maybe his recovery would be worse than she thought. “What about him?”

Keya took one last look around the room, wondering if this was the last time she’d see it this way.

Somehow she knew that everything was about to change.