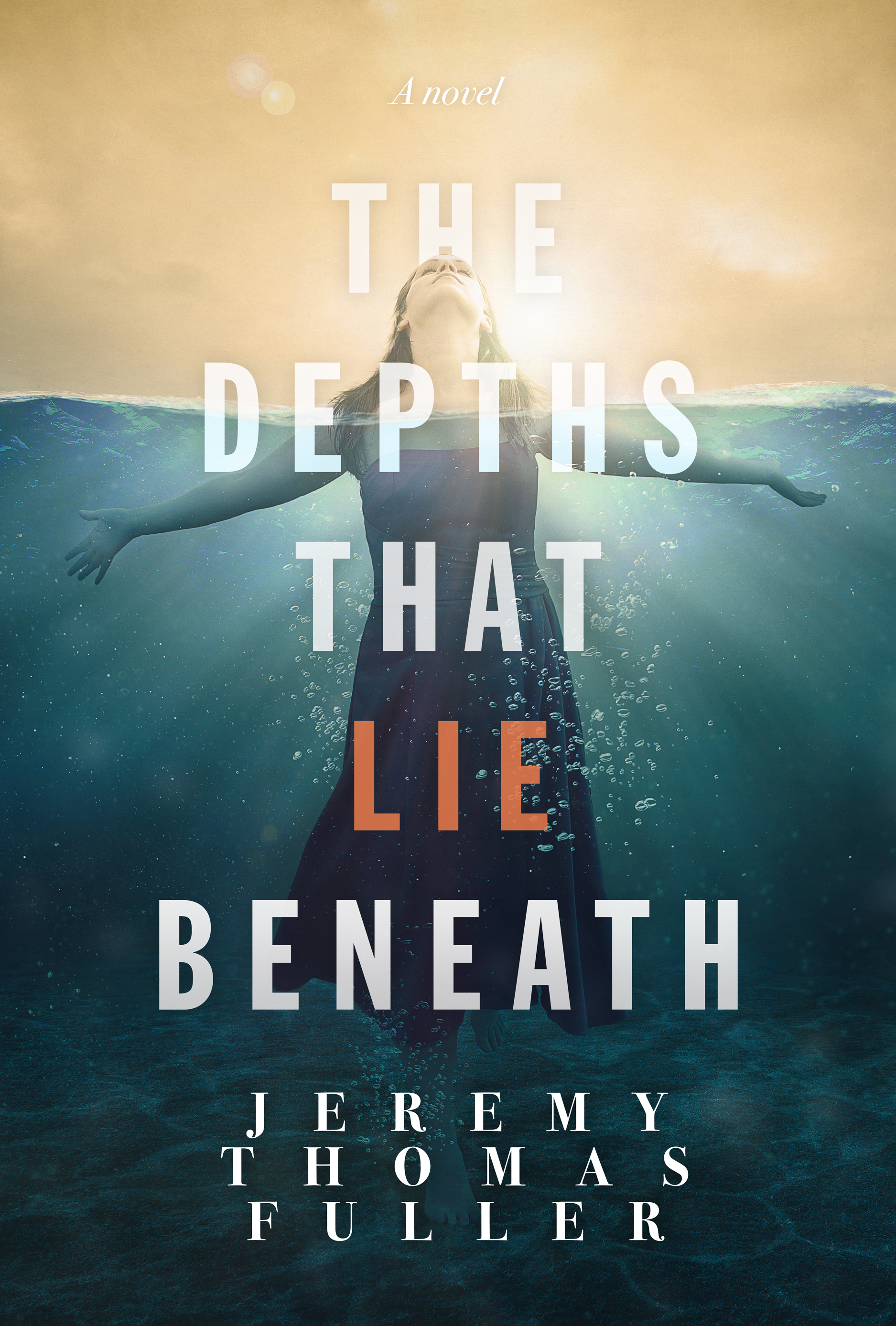 The Depths That Lie Beneath

Alice is trapped in a world she hates: the world of the Real. Her father beats her. Her mother is dead. And Alice is alone, save for her best friend, Taylor. But Taylor doesn’t see her the way she wants to be seen.

One day, Taylor kills himself.

Left adrift and growing increasingly depressed, Alice slips and falls into the same thing that took Taylor’s life: Dottie’s Pond, the place no one is allowed to go.

But instead of dying, Alice emerges in a fantasy land full of water and magic. There her memories emerge to haunt her, and mysterious paintings of Taylor adorn the palace walls.

EXCERPT    This is the cold open.
CONTENT WARNING! This excerpt depicts domestic violence against a teenager.

The shapes that Alice drew were finally true.

Maybe it was the scent of lavender wafting in through the front windows, or all the coffee she’d had, and it was already three in the afternoon. She wasn’t supposed to have coffee—her therapist said it heightened her sense of detachment. But Alice knew that sometimes even therapists told lies, and today caffeine was the only thing anchoring her to reality.

The shapes were true today. Maybe it was because the lines were red, or she was alone, or because the kitchen door kept swinging open with its usual stupid creak-clack-creak, intruding on her thoughts. She saw those interruptions like points on a map, destinations for her pencil on the page, pinprick lights calling out to her in song.

The page was more real today. Maybe it was because she hadn’t been to school, and Father wasn’t home yet, and she didn’t know where he was, and she hoped he’d finally managed to find that cliff he’d been teetering on. But that wouldn’t be true.

Today her lines were strong. Because even terrible artists sometimes have good days. Because sometimes even hopeless drawings can reflect the truth.

The front door slammed and she was proud she didn’t jump. Her pencil only slipped a fraction of an inch. The mark it made was a jagged fragment of her mind, falling into the white recesses of the page. She felt the world flicker around her.

She let one jaw muscle clench.

Father was lurching, and it was only three in the afternoon. Alice took in a whiff of fresh lavender and moved the pencil another flick. A shape was growing.

“Look at me,” Father said. There was no edge to his voice. It might have even been kind.

“Look at me,” he repeated, softer.

She tried, but her eyes went first to the picture of Mother on the table. The one she’d brought down with her to draw beside, the one with Alice at age six, and Mother with the seashell necklace Alice had made, the two of them looking so happy. Their long, blonde hair matched perfectly in the setting sun.

“Don’t look at her,” Father said, a hint of a hiss escaping his lips. “I want you to look at me.”

He took a step forward, toward the kitchen table. He was on the other side of the room. It would take him three and a half strides to reach her, unless he’d drunk enough to wreck his gait; then it would take five. She let her pencil drag along the page, staring at his boots. Those brown boots, covered in mud, which meant he’d been crying again. Which meant his drinking had been worse, so it would probably take six. He’d found his cliff, but he still hadn’t taken the plunge.

“My face, dammit,” Father said, listing sideways, using the back of the couch for support. The kitchen door kept moving, creak-clack-creak, and Alice moved her pencil down, and right, then up and curving down. There. A true shape. Something no one could destroy.

Her eyes finally made it to his face.

“You went again,” she said, and she saw his eyes tighten. The wrinkles there were more pronounced than she remembered. She hadn’t truly looked at him in so long.

“Of course I went,” he said, taking one step forward. Four. “You weren’t at school.”

“I was sick,” Alice said. “You would have known that if you’d been here.”

She shouldn’t have said that.

“I’m not lying,” Alice said, feeling calmness overtaking her. She was true, today. Her pencil couldn’t lie. “You can call the school and see. I am feeling better now. Thank you for asking.”

“You’re drawing again.” His eyes narrowed. “Have you been drinking?”

“Mrs. Erion says I’m not to have caffeine.” But therapists sometimes lied.

“It’s not caffeine I’m talking about, young lady.” He stayed where he was, leaning on the back of the black recliner. “That cabinet was locked.”

“Drawing isn’t against the law,” Alice said. As if to prove her point, she moved the pencil and began again. The shape grew, mirroring her thoughts. The lines were jagged, sharp, pressing. Her thoughts were almost a blur.

“You always do this,” Father said.

“I’m allowed to draw.” Creak-clack-creak. Something flickered on the wall.

Alice set her pencil down, feeling coldness settle in. She took in a breath, mustering control of her limbs, her eyes, her voice. She reached for her long blonde hair, remembering Mother’s in the photograph. She didn’t look at Father’s feet. She couldn’t look into his eyes. She stared at the page instead, enduring the coldness as it fell through her.

Her lines were true, but the room was not.

“How dare you say that to me,” she said, and she was proud of the way her voice didn’t flinch, didn’t cower, didn’t shake.

He was there in a flash, suddenly beside her, nearly ripping her shirt as he dragged her off the chair, up onto the table. His strength was incredible, his eyes sharp.

He didn’t say anything at first. He just held her, face to face and eyes to breath. He held her collar, tightly. Her hair draped over his arms.

“You’re a waste,” he said, and somehow that hurt more than anything else he could have said.

It was only three in the afternoon.

The walls elongated in her vision, the true lines on her page escaping their boundaries, growing upwards, extending. She watched them quiver as they moved, crawling along the table and up the yellow kitchen walls, the scent of lavender filling her. Creak-clack-creak the kitchen door said, but the world as Alice knew it was no more.

In his place was a dragon, a fire-breathing dragon that smelled of beer, great reptilian face built from small red flickering pencil lines. It opened its mouth and words came out, but Alice was focused on the pain inside its eyes.

“I tried to send you away,” the dragon said.

The room had turned into a palace, into a vast room lined with mirrors and glass, and they were flying on wings made of pencil dust. Alice was a dragon of her own, and Father’s breath was fire.

“Why don’t you just leave?” his dragon asked.

She had thought about it. She had even done it, but he didn’t know. She hadn’t made it far, and he had been deep inside his locked cabinet. She imagined that cabinet to be magic, full of secret potions and spells. She wanted to escape into it herself, and had, and would again.

“You need me,” Alice said. The truest thing she’d said. But she felt his grip tighten, his face move near. The grip at her collar grew more fierce. He was coiled like a snake. It was only a matter of time before he came unleashed.

“All of this is because of you,” Father said, and she felt it like a blast. Red fire assailed her, flying from his lips, and she flinched but took it full in the face. Her long hair flew as she recoiled, the pain of it stinging her to the core. She tried to move, but he was holding her too tight.

She looked around the mirror palace room, seeing no rescue in it. No wizards or mages, no sprites or elves. It was just two dragons, fiercely battling their reflections. This, like all her battles, must be won alone. She felt a tear drip from her eye as the red lines crawled, as she felt the world around her quiver in despair.

Escape, like so much else, was a two-faced sword. You can run, but the hurt you leave behind might be less than what you face. You can flee, but it’s only three in the afternoon.

When you’re in your father’s grip, it doesn’t matter what lies you tell.

“She loved you,” Alice said, knowing it was false, thinking it might help.

He hit her then, right across the face. She flew out of his grip, slamming hard into the kitchen cabinets and falling painfully to the floor, her limbs askew. The red lines flickered and moved, but her world held for a moment longer. She watched as her father dragon loomed near, feeling the stinging in her cheek.

“You killed her,” Father said.

“Liar!” Alice shrieked, scrambling to her feet. Her hands were claws, her arms wings. The room tilted and turned, red lines everywhere. The mirrors were agitated now, reflecting wild light. She wanted to say more, but the words wouldn’t come. All she had was anger, pure and clean, but anger wasn’t enough for words. All she had were lines and shapes, true shapes, disguise. All she had was stinging skin.

Father took a step, his wing rearing back. And before she could do anything, before she could duck or scream, he had raked her yet again. She fell sideways, scrambling on the cold linoleum, red lines shifting in her vision. She longed for a door as pain filled her, for a portal, for escape. She crawled, but he kicked her shin. Then he hauled her up, lifting her as if she were a simple cup of tea, throwing her back onto the table without even a word. The dragon in her vision reared, eyes flashing, fire raining down on her.

She screamed as the blows rained down. She felt their familiar shape and screamed, though every fiber of her wanted not to. Tears tracked down her face as the red lines flailed, slicing, slapping, tearing, true. He hit her and she burned, the fire from his eyes worse than anything else in that cold, cold room.

Then she saw it. The magical portal she had wished for. It opened in front of her, on one wall where mirrors were. It yawned open as it shone, and she reached for it with claws of red.

But Father was too strong.

He took her and wrenched her to the side, and she was dimly aware of her consciousness beginning to recede. She had moments left to leave, to run, to win, or he’d have her again. He’d destroy her face—may already have—and she wouldn’t go to school for a week. Maybe it was better that way. Maybe that was true. Or maybe she should run just like he’d asked her to.

He pulled back for one moment, taking a breath. She saw his jagged face rear up into the air, and her eyes flicked one last time to the pencil drawing of her mother on the table.

She summoned all her dragon strength, ducking under his swinging claws, sliding and falling and getting up and lurching toward the door. The portal yawned and shone, creak-clack-creak, and she heard him roaring behind her as she made it all the way to it and out. Lines shattered around her as the sun burst into her skull, tears streaming down her broken face as she kept moving, one foot in front of the other, trying not to scream as Father thumped and rumbled and roared behind her in the house. She was free, now. She was destroyed.

It was only three in the afternoon.