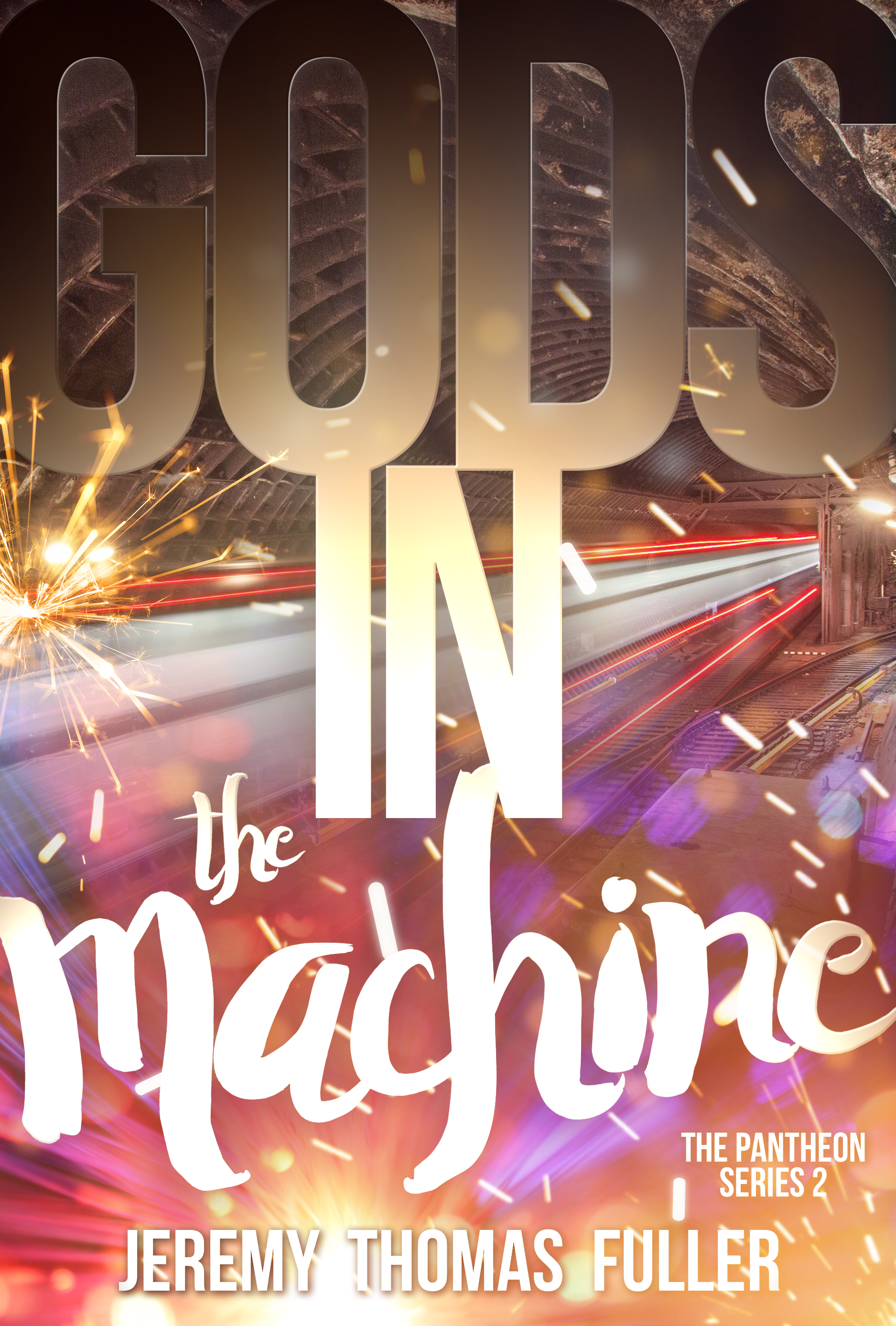 Gods in the Machine
The Pantheon Series: Book 2

A New York subway hurtling through the tunnels with a bomb. A bartender who drinks way too much tequila. A pair of glasses. A monkey with a scarf. What do all of these things have in common?

Lice. They all have lice. Well, not the monkey. He was pretty clean.

Gods in the Machine (Pantheon Book 2)
Buy on Amazon

EXCERPT    This scene occurs toward the beginning of the book. We are seeing one of Bitteric’s flashbacks here.

I shuffled into Broder’s, looking for all the world like a wet rat after a long and fruitless night of scavenging in Times Square. Not because I was particularly wet—although it was raining—but because I had my tail tucked between my legs.

No, I don’t have a tail. I was speaking figuratively.

Broder’s is the kind of place tourists accidentally wander into, take one look at the customers leering up at them from their grizzled pints of house red ale, gulp a little, tell themselves they can do this, that after all, New York is all about new experiences, then realize they are kidding themselves and high-tail it out of there.

No, they don’t have tails, either. What is it with you and tails?

This happens every five minutes or so, more or less on the dot. And while it gets a bit drafty with the door opening so often and the tourists looking around, it does provide a bit of necessary timekeeping to the place. Plus it leaves more room for the locals, the ones who don’t mind that the bar smells like stale hot dogs, that the floor sticks at you when you walk, that the bartender may or may not be hiding a cleaver and a big gun underneath the bar top.

I ambled over to the bar, stepping lightly so as not to get stuck in place, and heaved myself into a seat on the far right end. Broder himself was there that night, bushy beard and ample chest hair hanging out of his v-neck t-shirt. He sort of resembled a human-shaped bear, if bears had a penchant for tequila.

“Morning,” Broder rumbled at me, pouring an ale and sliding it the foot or so across the bar and into my waiting fingers. It was always morning to Broder, even though it was actually something like 9 PM on a Sunday night.

“Nothing good about it,” I said, taking a sip and feeling the alcohol overtake me almost instantly.

“Didn’t say good,” Broder said, doing something with a dirty cloth and an even dirtier counter behind the bar. “Anything I can help with?”

I looked at him curiously. “Since when are you actually helpful?”

He gave me a level stare. “Your beer’s getting warm.”

I dipped my head and took a sip.

“April’s family was over last night,” I said. “Again. They still hate me.”

“They’re all doctors. They think everyone else should be a doctor.”

“Aren’t you a doctor?” Broder kept wiping furiously at a spot that wouldn’t go away.

“I’m an optician, dammit. It’s not the same thing.”

“But you get paid pretty well.”

“No, I don’t.” I shoved myself back from the bar, growing increasingly flustered. Why didn’t he get it? April was a doctor. Her father was a doctor. Her mother was an orthodontist. And here I was, just a stupid optician, fitting glasses on people’s faces every day for twenty-seven dollars an hour.

I was a failure, compared to them.

At least I got a nice apartment out of the deal.

And a pretty hot wife.

I took a deep breath, then an even deeper gulp of ale. Broder brewed it himself in a back room, and this batch was particularly malty. I enjoyed the carbonation as it tickled my throat.

“You seem happy here,” I said to Broder. He had moved on from the dirt spot and was tackling a long line of equally dirty glassware.

He eyed me briefly. “That’s because I have something you don’t.”

He slammed a bottle down on the table, along with two shot glasses.

“I don’t know,” I said, already regretting the beer. I was never very good at holding my alcohol.

“Well,” Broder continued, “there’s a simple solution to that.”

“Here’s where you tell me to get really drunk.”

“No,” Broder said, filling the shot glasses with tequila. It was from the top shelf, I noted. It was unlike Broder to be so generous. He handed me my glass, picking up his own and gesturing with it in the air.

I took the shot.

“I was going to suggest magic,” Broder said, and I sprayed tequila all over the bar.

“Jesus,” I said, trying to wipe my mouth. The little bit of tequila that had gotten down my gullet burned. But it was a pleasant kind of burn, like when you sit too close to the fire on a cold winter’s day. With your mouth open.

“Jesus isn’t a Deus,” Broder said, taking my glass and filling it again.

“What?” The man wasn’t making any sense.

“Listen,” Broder said, “I’ll tell you my secret, but only if you swear not to tell anyone else.”

As long as it wasn’t too illegal.

“There are these Medallions, see,” Broder said, putting down his cloth and leaning in. He picked up his tequila and gestured for me to do the same. “They can give you whatever you want.”

“That’s…interesting,” I said. I knew it. It had to be drugs. Magic wasn’t real, after all.

“I’m serious,” Broder said, and he took the shot. I followed suit, this time managing to get the liquid all the way into my belly. I could feel it affecting me instantly, alcohol transmitting directly to my brain. The room swirled a little bit, but I welcomed it. I needed a little room swirling right now. “The Medallions give you whatever you want,” Broder continued. “You just say a Wish.”

“No. With these, you only get one Wish.” He pushed another shot of tequila across to me. “With a genie you get three.”

“But there’s always a Consequence.”

“A what?” I took the tequila all at once, happy that once again I managed not to spill any of it. A layer of film pushed across my vision, sort of like a camera going out of focus.

Like I said, I’d never been very good with alcohol.

“A Consequence,” Broder said, taking my glass back. “The Deus gives you what you want, but then they…well, they kill you.”

“I think you’ve been drinking too much.”

“I’m serious. Once you’ve got a Consequence hanging, you can’t make another Wish until the Consequence arrives. It’s kind of like a check-and-balance system.”

“A check and…Broder, do you tell this story to everyone who comes in here?”

“Because beer just won’t do it for you,” he said. “I can see that plain as day.”

“This tequila sure is.”

He poured us another shot.

“You need something else,” Broder said. “Something stronger. Something better.”

“This is the best tequila you own.”

“Let me tell you a story,” he said, not slurring at all. “A story about magic and ancient love. A story about how a monkey married a demon, and had all the children in the world.”

“You’re not making any sense.”

“I forget their names,” Broder said, “but the story is important. This demon loved the monkey, and she wanted nothing more than to marry him and have his children. But the gods did not allow alliances between Deuses and Demons.”

“So the Demon threatened the Pantheon,” he continued. “She said that if she was not allowed to marry this monkey, then she would marry another Demon instead, having a horde of angry demon babies and taking over the world. And so the Pantheon acquiesced to her wishes, and the world as we know it was born.”

“I’m pretty sure you’re drunk,” I said. “How did you learn about all this?”

“You were in Tibet?” He looked like a tequila-soaked bear, but I had never thought of him as a cold weather man.

“Sure,” he said. “A year ago. People up there do some strange shit. They worship some interesting things. And some of what they worship is actually real.”

He shook his head. “Lost it,” he said. “Someone stole it off me a while back. Could never find it.”

“I am upset, man. If I still had that Medallion, do you think I’d be here in this bar?”

I frowned at him. “I thought you liked it here.”

“I like it well enough. But tell me you would stay here if you had magic.”

I thought about April, my wife. About Missy, my daughter. About my shitty job.

It was actually a tough call.

“Doesn’t matter much,” Broder said. “Maybe if I get enough cash, I’ll go find another one.”

“There are more of them?”

“There are three of them. And I’m pretty sure at least one of them is still in Tibet.”

He handed me another shot of tequila, but the room was really spinning, now. I didn’t think I could take another. “I just remembered the Demon’s name,” he said. “She was an archer, all in red. Her name was Tara.”