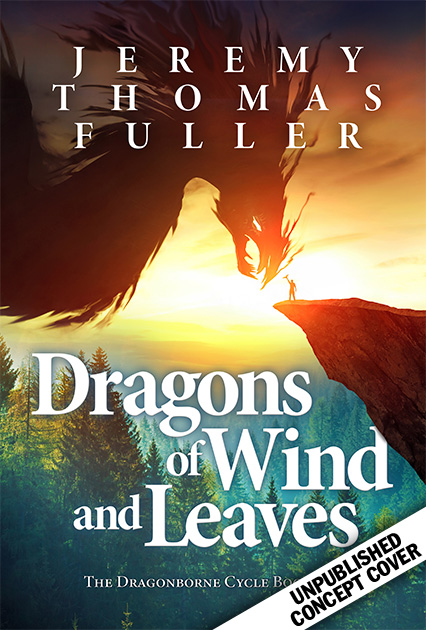 Dragons of Wind and Leaves

The Dragonborne Cycle: Book One

In a pair of worlds with no ground—the limitless Sky, and the endless Forest—Skye is shunned because of the strange bond she has with her dragon. In one night, she loses everything—her parents, her dreams, and her home—when her boyfriend flies over her floating city with an army of fabled talonwyrms, burning it all to ash.

As Skye’s world unravels, she finds unexpected solace in the Naturalborne Army, a group of misfits like her who also bonded their dragons in the natural—but illegal—way. Now the real Army, the Army that Skye had wished her whole life to join, is after them. Skye must master her magic, learn more about her bond, and defeat the horrible Army General before he can enslave all the dragons in the Sky.

But when Skye discovers that her boyfriend is in fact a ruthless killer from the Forest far below, she realizes that she needs help. To defeat the dark forces gathering in the Sky, she must find her courage and bond with her single greatest fear: a massive water dragon that terrorizes children’s nightmares.

The skies below Eleveau sparkled in the early morning sunlight as Skye winged her way between the stones. Lya’s body was warm beneath her, scales shimmering, wings held out to the side as if she were gliding. She wasn’t, of course. She was far too small for that.

She had to use gravic to fly.

Skye held her hand out in the forward sign, hand flat and facing down. She felt recognition through the bond, knew it as Lya’s own gravic responded to her innate command. She breathed in a deep breath of crisp skyswept air and smiled as they flew.

It was a glorious, glorious morning.

They surged forward, feeling the rush of the sky sweep by, laughing together as bobs and pinpricks and larger stonespheres flew near them. One sailed by especially close, narrowly missing her face, and she flinched. Skies—she needed to be a bit more careful.

“Watch out!” she shouted to her dragon, dropping her pinkie down and sending a command through the bond. Lya could always feel her, even if she couldn’t respond with words.

They flew down, fast.

Just in time to avoid a bob that was heading right for them, the stone about two feet around and very, very solid. That would have been her head, or Lya’s, had they moved a moment later.

Welcome to the skies.

Skye gave out a great shriek of joy, holding her arms out at her sides. The sun shone down on them as it rose in the east, yellow rays sending energy into her spirit. She felt her Well increasing fractionally, lending more power to her gravic. She smiled, patting Lya’s flank, tilting her fist to the right to indicate a turn. Lya cawed into the air, joy apparent in her dragon voice.

“Isn’t this great?” Skye shouted over the wind. “Such a perfect morning!” Lya couldn’t understand her, of course, but she wriggled just the same. Skye felt happiness translate through the bond, glee as they soared. “Where do you want to go?”

As if in answer, she felt Lya moving left-up. Skye followed suit, adding the correct hand gesture: a fist with a thumb pointed up, tilted to the left. She took in another breath of skyswept air and breathed it out in a full gee, feeling the rush of inertia as they accelerated rapidly. This was living. This was what got her up every day, what kept her from resigning to despair.

This was what she was born to do.

“Okay,” she said to Lya as they leveled off. The pins and bobs had lessened here, and the nearest larger stonesphere was a few hundred dragonlengths away. “Time for target practice.”

She pulled the dragonbow from where she’d kept it tied to Lya’s saddle on the right, careful not to accidentally drop it. The first one she’d made had been unwieldy, too heavy to hold while flying. So it had fallen, and fallen things fly forever. Free.

She just had to believe.

Okay. Target practice. She could do this, though she needed to make sure nobody from the Army caught sight of her. She could see the Eleveau Perimeter Defense scouts ranging all around the skies, but she was still technically inside the Perimeter. As long as she didn’t actually encounter any other dragonriders, she should be fine.

She stuck the dragonbow into the milcloth loop she’d added to her saddle, feeling it settle firmly into place. It was already strung, with a line she’d made from milwheat fibers, using the twisting technique she’d learned from Dragonmaster Anessa. It was a good bowstring, and strong. It would work.

If she could figure out how to shoot the damn thing.

A bob was just ahead of her, maybe a hundred feet out. It should be easy enough to hit, since it was about three feet in diameter. It was moving, of course—all stones did—but everything moved in the sky. That was the entire point of being a dragonarcher: hitting your target while both of you were in motion.

She pulled the bowstring back, letting Lya take over gravic for the both of them. The dragon could only hold them for a few seconds at a time—then Skye would need to return to powering her portion of their flight. The bowstring felt tight against her fingers, pain already beginning as she struggled to hold it back. But she ignored the pain, pulling an arrow from the pouch she’d strapped to Lya’s left side. She tried to nock the arrow to the string, but it was too difficult to hold everything at once. That was when she realized her mistake.

She should have nocked the arrow before drawing the bow.

Skies, she was stupid. She fumbled with it, the bowstring loosening since she couldn’t hold it back. And the arrow slipped out of her hand, sailing away into thin air.

If there was a ground—if the fabled Terran Val was real—it might eventually find its way there. But Skye knew that Terran Val was just a myth. That the arrow was gone, now. No one would ever see it again.

She felt a lump in her throat as she watched it falling out of sight, listing slightly in the wind. It had taken her a good two hours to make.

Well, there was nothing for it. She had to try again. She wanted to be an archer, dammit, and she needed to learn from her mistakes. If only she’d had training. If only she’d gotten into the Army. If only—

She felt a shushing sound from Lya through the bond. Then there was a spike of alarm, and Skye glanced around, trying to see what was the matter. When she saw it, her heart dropped to the bottom of her chest.

There was a talonwyrm heading right for them.

It was huge, and red, and long and sinuous and she could already envision the fire that would come from its mouth when it got closer. It looked evil, as if all the anger in the world had manifested here in this one, horrible dragon.

There hadn’t been a talonwyrm spotted near Eleveau in years.

What in the Skies was going on? Was it real, or was it her imagination? And if it was real, was it really headed straight for her?

She felt fear spike through her and Lya both, anxiety as they realized they might not be able to actually outrun this thing. Talonwyrms were fast, after all.

They banked hard, turning away from the wyrm, quickly ramping up to a full gee of power. It had definitely caught sight of them—she could almost see its eyes blazing as it flew. So she hunkered down on Lya’s back, trying to eliminate as much wind drag as she could. One gee was as fast as she could go.

She knew it wouldn’t be enough. She dared a glance behind, seeing the wyrm already closer in the sky. The damn thing must have a larger Well than her, to be able to move so fast. Fire breath and a larger Well—it almost didn’t seem fair.

“There must be a way to lose it!” she shouted to the wind. Killing it would be even better, but she knew that was a hopeless task. The dragonbow was still stuck in the mount where she’d placed it on the saddle, waving about wildly as the air passed them by. It wouldn’t work, she knew. She wasn’t a good enough shot yet.

But she had to do something.

They were headed for a stonesphere—a rather large one, actually. It was moving with a mind of its own, as usual, drifting about lazily in the sky. Skye watched it for a moment as they approached, wondering if her idea could work. Only presagers could actually predict the movement of the stones. Still, that didn’t stop her from guessing.

Nothing for it but to try.

She hunkered down again, checking the position of the talonwyrm behind her. It was close, now, its mouth yawning wide. She could see an orange glow burning behind its monstrous teeth, fire ready to blaze upon her with the power of a thousand suns. She had to move, but she wasn’t close enough to the stone.

“Just another second!” she shouted to Lya. The stonesphere was looming in front of them, the wrinkles and ridges of it starkly visible in the morning light. It was so close, and they were going so fast, and the talonwyrm’s breath was hot on her back, and—

She signaled the turn, sharply, fist tilting hard to the left. Lya responded instantly, the kind of quick reflexes only a naturalborne pair could muster. The stonesphere filled her vision, whipping by them, Lya’s claws scrabbling on the surface of it as they flew by. A second later, and they would have been smashed against it, nothing more than blood and splintered bone scattered across the stone. But they had not been a second later.

The talonwyrm tried to move with them, to avoid hitting the stonesphere itself. But it was slower to adjust—although it was powerful, it did not have the maneuverability of the smaller agile Skye was riding. It blasted a stream of fire ahead of it, maybe hoping to burn the stone to a crisp. Which, of course, did not work.

It would have plummeted straight into the stone.

It would have fallen right into Skye’s plan.

It would have died.

But the stone moved.

“Skies!” Skye cursed, watching the talonwyrm sail by the stonesphere with inches left to spare. It had finally managed to turn, coming back to face her and Lya.

Never try to predict the movement of stones.

Now the wyrm was back on them, flying fast, maw open once more, flames flickering around the edges.

There was no way they were going to survive this.