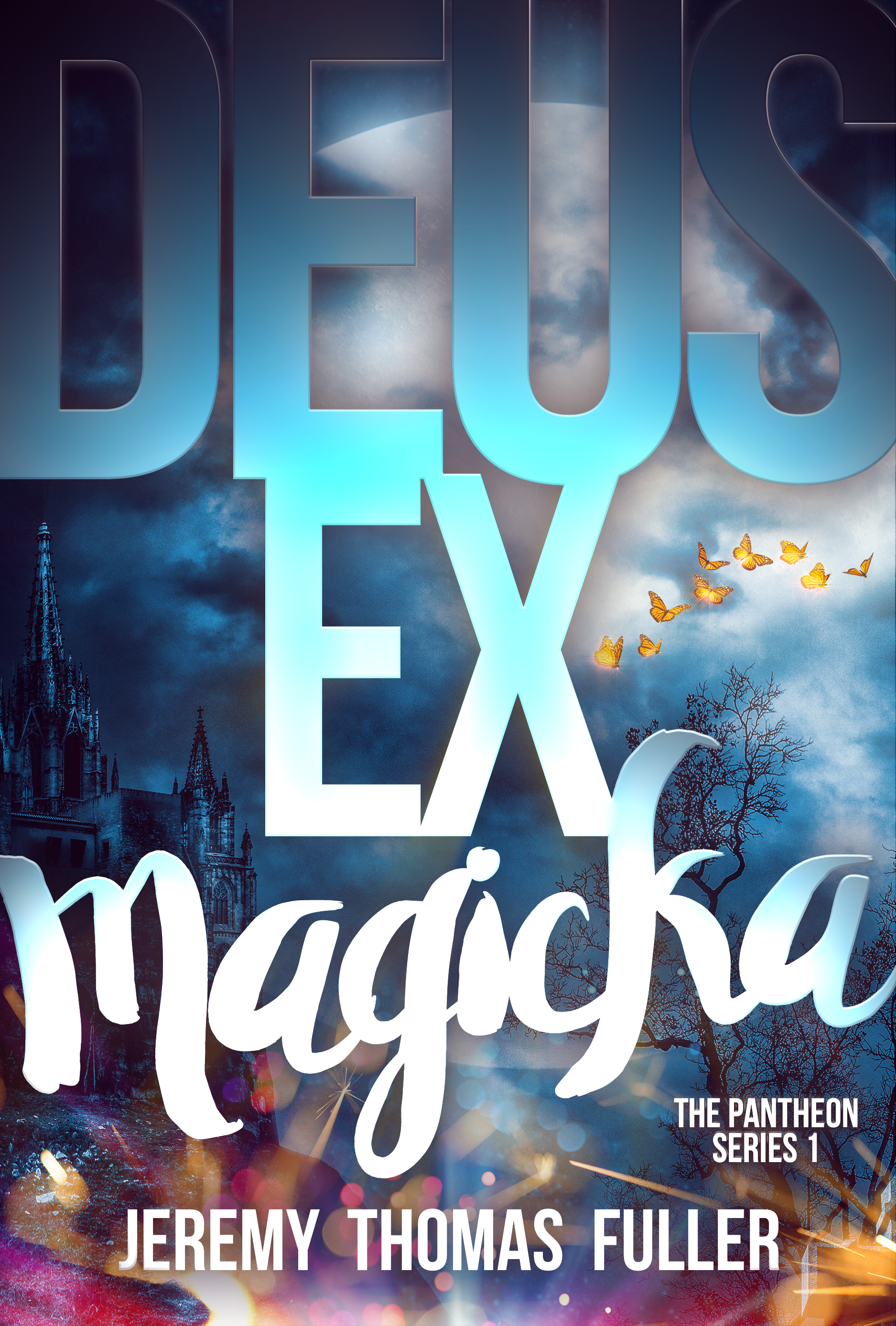 Magic has a price—Bitteric learned that the hard way. After casting a simple request for some good spice tea, a herd of rabbits killed his wife. Maybe the Deus thought that was funny. Maybe the rabbits were really hungry.

Or maybe Bitteric should have learned to brew his own tea.

Now he’s on a quest to find the final Medallion, to pit the Three Deuses against each other, or trick them, or maybe just ask them really, really nicely. He wants his wife back. And nothing—not even a flood of Amazonian proportions, or six hundred chattering ferrets—will stand in his way.

EXCERPT    Here’s the cold open from Deus Ex Magicka. As usual, we start in medias res.

When I killed my wife, the first thing that came into my head wasn’t anger or relief. It wasn’t even “oops.” Actually, there were two thoughts that hit me right off the bat:

Is the tea ready yet?

And why are there so many rabbits in the bathroom?

I guess you’re probably wondering why I killed my wife. Or, depending on your current frame of mind, how. Both relevant questions, I assure you, but it’s not something I can go into right now.

Right now, see, I had a lunatic chasing me.

I always try rhyming in situations like this. Helps calm me, I guess, and I had a new one I’d been working on. I’m quite proud of it, really. Here goes:

There once was a wizard named Bitteric, who thought he would start with a limerick. He needed to run, but the rhyme was no fun, so he—

Shit. I ducked as a box exploded next to me, feathers flying in the air. I hadn’t been expecting feathers. A shot rang out and I flinched—old Hammer was getting close. So I sent a quick Wish to the Deus and took off running again.

I hoped this would be quick.

I heard footsteps behind me as I sped down the dark alley, threading my way between the squat shapes of dark buildings that loomed at me in that way that buildings have. You know, as if they really want to fall on top of you, but something is holding them back.

The asphalt was slippery, probably from someone else’s urine. I sniffed, got a mouthful of it. But I also got something else: rain.

I risked a glance behind me and almost got my face blown off by Hammer’s gun. Where the hell had he even gotten one of those? He was way too old for that.

I turned sharply, careening into a metal trash can and choking down a curse. I spit a feather out of my mouth as I changed directions, heading across a narrow causeway. A little stream of water flowed under my feet as I ran. I could hear it, gurgling a funny tune.

“Hammer!” I shouted, my voice echoing off the cement walls all around me. “Old Ham!” A chunk of plaster exploded where my head had been a moment before. “You don’t have to do this!”

“Give it back to me,” Hammer growled from thirty feet behind, “and maybe I’ll leave your head intact!”

Another shot rang out, and this time gravel spurted up from the ground. I jumped, and maybe squealed a little, and kept on running.

I was never very good at running.

“Liar!” He shot me again, and I felt the bullet slice open my jeans. I felt a line of pain where the bullet had grazed me—his aim was getting better.

“Look!” I shouted, swinging around another corner and trying to get my bearings. “Maybe I can help you find it!” Midtown was that way, which meant—

I turned the other direction and found myself face to face with my pursuer.

“Just found it,” Hammer said, pointing the gun at my chest. “Now hand it over.”

“Bullshit. Give it to me now, or I’ll shoot you and take it. It’s mine, Bummeric. I earned it fair and square. You have fifteen seconds.”

“It’s Bitteric,” I said. “And you have fifteen seconds.”

Hammer looked confused. “But I—”

“You’re the one with the gun.”

“You’re doing that on purpose!” I said. “Eight seconds.”

I flicked my eyes up to the heavens, just for a moment. Yep—rain. Water was imminent. Now all I needed was…

“Five seconds,” I said, shifting slightly to the right. Hammer’s gun followed me.

“What the hell are you doing, Shitteric?”

“Now you’re just being mean. Can I—” I reached for my back pocket, and Hammer got a gleam in his eyes. It didn’t match well with his pockmarked face and ugly dirty beard. He leaned forward eagerly.

“Give it,” he said, waggling the gun.

I pulled a tiny portable umbrella from my pocket and opened it.

Hammer jumped back a pace, shock evident in his ugly eyes. “You wouldn’t.”

“One second left, Ham,” I said, placing the umbrella over my head.

I let him go on for a minute before stopping him. “Seriously,” I said, “is that really necessary?” I was still holding the umbrella.

“You have a wife?” The thought of him with a woman sickened me. She was probably hideous.

“I demand you tell me!” Hammer said. He was holding the gun sort of uselessly, now, pointing it sideways at the road.

Hammer made some kind of noise. It sounded like a cross between a growl and a guffaw, the sort of thing I imagined he probably did in bed with that curmudgeonly wife of his.

He pointed the gun at me again.

I risked a quick glance up at the sky, thought I saw a little glimmer there. Good—so my Wish had worked. I let a smile grow on my face as I stood there under my umbrella, grinning at Hammer.

And he pulled the trigger.

A bullet shot out of the gun, making a beeline straight toward my heart. Instant death headed right for me, spinning in the cold night air, but all I could do was laugh.

See, it had finally started raining.

At the last possible second, the bullet turned into a pansy, flopping harmlessly against my leather jacket. The gun turned into a ferret, and the aforementioned ferret immediately turned and burrowed under Hammer’s clothes. He screamed something at me, but more ferrets were appearing. They were coming out from everywhere, flooding out from holes and hideaways and pipes and drains. They clamored for him, ignoring all the rain, making funny chattery ferret sounds and piling up on the crazy old man with the pitted face. The whole thing smelled like a lot of wet rat.

I wasn’t sure how much of that was Hammer’s fault.

They didn’t kill him. Ferrets aren’t that violent, not like rabbits are. But there really were a lot of them, jumping and scurrying around. Instead of killing him, they just grabbed him like a swarm of ants and ferried him off down the street, still chattering to each other excitedly. I watched them go, the smile still on my face, and the rain stopped.

I definitely hadn’t expected the ferrets.

I put my umbrella away, folding it up carefully into its little five-inch form. Then I stuck it in my pocket and reached into my other pocket, my right butt pocket. The place where I put all my good stuff.

The Medallion was still there, of course. I pulled it out and looked at it gleaming in the non-existent moonlight. It was kind of freaky, actually. It was made of silver, I think, and it had a weird face carved into it. It looked a bit like those ancient Mayan gods I’d seen on the History Channel, with a big hooked nose and weird triangle eyes and some kind of headdress that was probably in fashion right now on the West Coast.

But it was mine. Finally mine. I’d done it! I laughed, hearing the sound echoing away toward the retreating ferrets and the asphalt and the night. I turned my face up to the heaven and let out a hearty chuckle.

Then it started raining again.

Shit. I thought my Consequence had passed.

I grappled with my pockets, trying to get the umbrella back out, but it was way too late. The water came gushing down from the heavens, torrents and torrents of it, and I was soaked in milliseconds. The street was soon a river, thick black water churning through it like I imagined the Amazon would look.

Except the Amazon, I realized, probably had piranhas.

This wasn’t good. I had just recovered from the lion and the baby llama.

Sure enough, I felt something bite me. Then something else. Then the water was up over my head and I was floundering, gasping for air, struggling to stay afloat. The little fishes with the wicked sharp teeth kept snapping at me, and I kept kicking them, trying to fend them off. But it was useless. Pointless. There was no way I could survive. Then my umbrella wrenched away from me in the flood, tearing out of my hands and funneling away into the brutal, cold water.

That was it. I was dead.

But I kept kicking at the fishes anyway, feeling cuts all over my body. Blood darkened the water further, coming up in turgid pools all around me. I felt my thoughts growing weaker, my movements slowing. I slipped beneath the surface and surrendered to the flood, to the incredible torrent of water and teeth and black blood and death.

I’d gotten rid of my enemy. I’d escaped a sticky situation. Old Hammer was gone, and his bullet was defeated. But the Deus always managed to find a sneaky way to make you pay for your requests.

What was the phrase? Out of the frying pan and into the fire?

Yup. That was how magic worked.