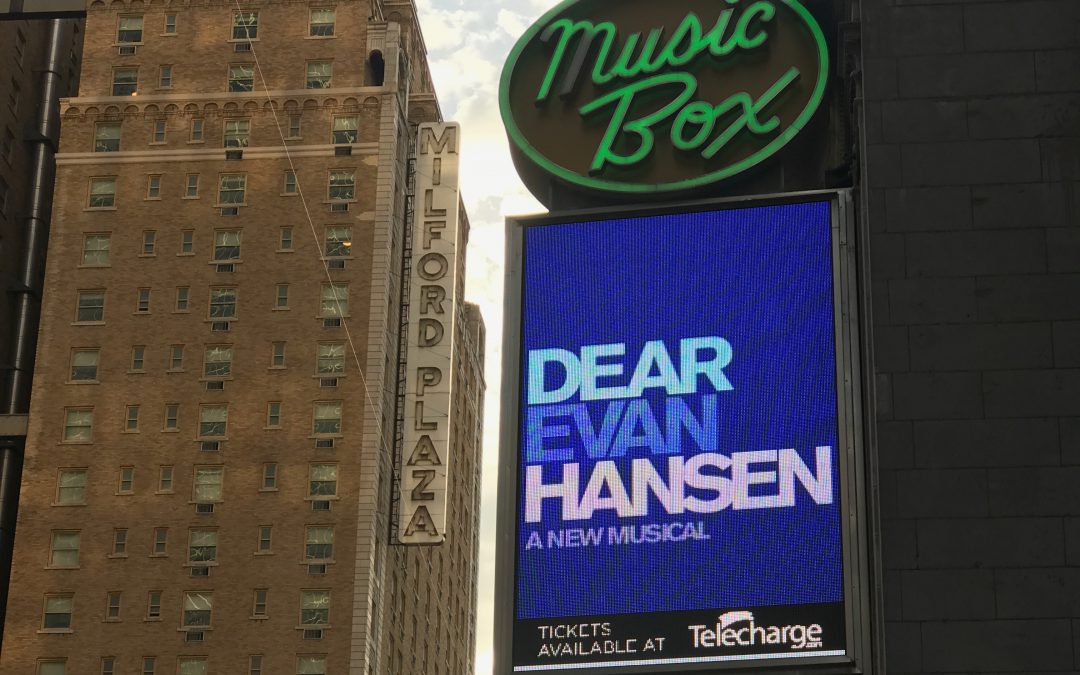 Wow. What an incredible piece of theatre. This is why we go to the theatre, folks. I’m struggling to figure out where to begin. Let’s start with the fact that I probably cried 16 times. They got all the moments so right from a deep psychological perspective, and they had this incredible cast to pull it off. The music works perfectly, of course—Pasek & Paul are brilliant. The use of projection is also perfect: nuanced most of the time, pointed when it needs to be. Lighting was great, and the sets zipped in and out fluidly. Great use of humor to offset all the feels. And the other thing I love about Broadway: the sound is always perfect.

This show is basically Fun Home for suicide, and I mean that as a high compliment. Only this show takes the audience through an even stronger roller coaster of emotions.

I’m a code-switcher, which means I automatically copy other people’s mannerisms and way of speaking in order to make them feel comfortable or fit in. I got so deeply into Ben Platt’s character, I found it almost impossible to talk with strangers during intermission. I suddenly had a bunch of his tics. My brain had to work overtime to even manage conversation. Also it turns out I was sitting next to a writer friend of Steven Levenson who wrote the book. What a great time to lose my faculties!

Because the subject matter of this show is so close to me, and because it’s so well-executed, it has quickly rocketed up the list to my #1 favorite musical of all time.

The cast: The whole cast is brilliant, but let’s talk about Ben Platt. This is a career-defining role for him and the most poignant role I’ve ever seen on stage. He will win the Tony, and his agent better get him back into some serious movie roles next for his Oscar in the next year or two. He is going to take off. I’ll take this one step further: I don’t think it will be possible to replace him on Broadway. This show is defined by him and he defines the show.

Rating: 1000 out of 5 stars (you can tell this rating system is really working well)

Verdict: Mortgage your house to see this with the original cast. It’s that good, and you won’t get another chance.