Broadway in review: Come From Away 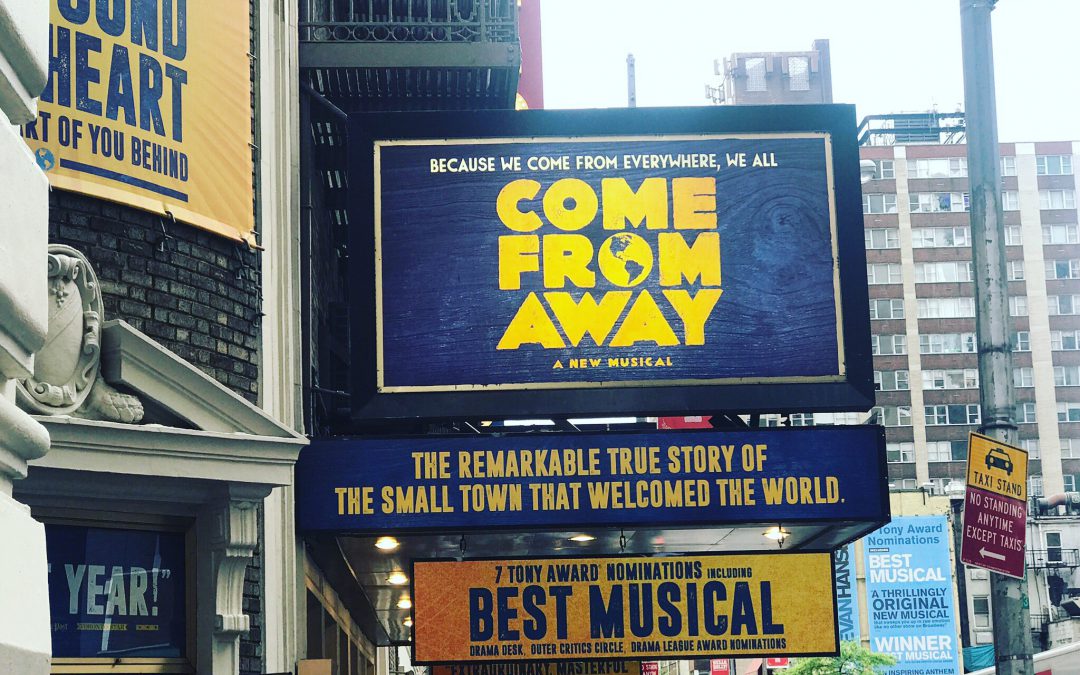 Come From Away (Original Broadway Cast)

This is an interesting piece. Relentlessly paced, shying away from conflict at every turn, there isn’t really a story to this show. It’s short and (too) tight, at only 1 hour 40 minutes with no intermission. The entire cast stays on-stage at all times, and the on-stage orchestra joins them from time to time. It’s singing peppered with narration for almost the whole time flat, with only brief beats to slow for emotion and only a few applause breaks. There are a decent number of feel-good moments, but without any corresponding negative to make them cathartic, it doesn’t reach the heights it could have. The humor is there, but there could have been more. And while the show feels complex and always moving, it’s nowhere near the complexity of Groundhog Day.

This show doesn’t crack my top 30 favorite musicals, but it still meets my minimum bar for a full rating of five stars. The score is good—better than I expected. The pilot character’s solo number (“Me and the Sky”) works quite well, and there were a number of moments where I got chills. It was neat seeing the cast members flip characters constantly, but they only really played about two each so you never quite get to the multiple personality insanity of stuff like A Gentleman’s Guide to Love and Murder.

There’s a turntable on-stage, but it wasn’t really necessary. I guess Hamilton unleashed turntable mania on Broadway (Anastasia has 3 of them, Groundhog Day has 7). It didn’t do much except in a few places.

As a spoiler warning: I advise not listening to the cast album if you intend to see this show. Most of the humor and heart will be spoiled if you do. If you’re a sharp listener I don’t think this show offers much repeat potential, either. (Unlike Groundhog Day.)

I’d be interested in seeing what the 2:40 version of the show looks like, broken into two-act structure with more emphasis on conflict. There were a number of conflicts they kind of touched briefly, but the show was too short to really dive into any thematic content. It feels like a summary of a thing that happened with nice, upbeat music and a few good moments. I’d like to see what would have happened if they’d really tried to pull at this material a lot harder. There was a lot to mine here, but the show seems more interested in logistics than in character.

It’s cute, but they didn’t really go for it.

Verdict: I’d recommend this show, but it’s way down the list. See Dear Evan Hansen and Groundhog Day first, then hit some others you may have missed like Miss Saigon and Hello, Dolly! Those shows have more meat to them and actual stories.

NB: Audience members around me could be overheard saying things like, “Everyone must see this show! It was incredible!” So take my criticism with a grain of salt, as usual. I’m very hard on these shows.