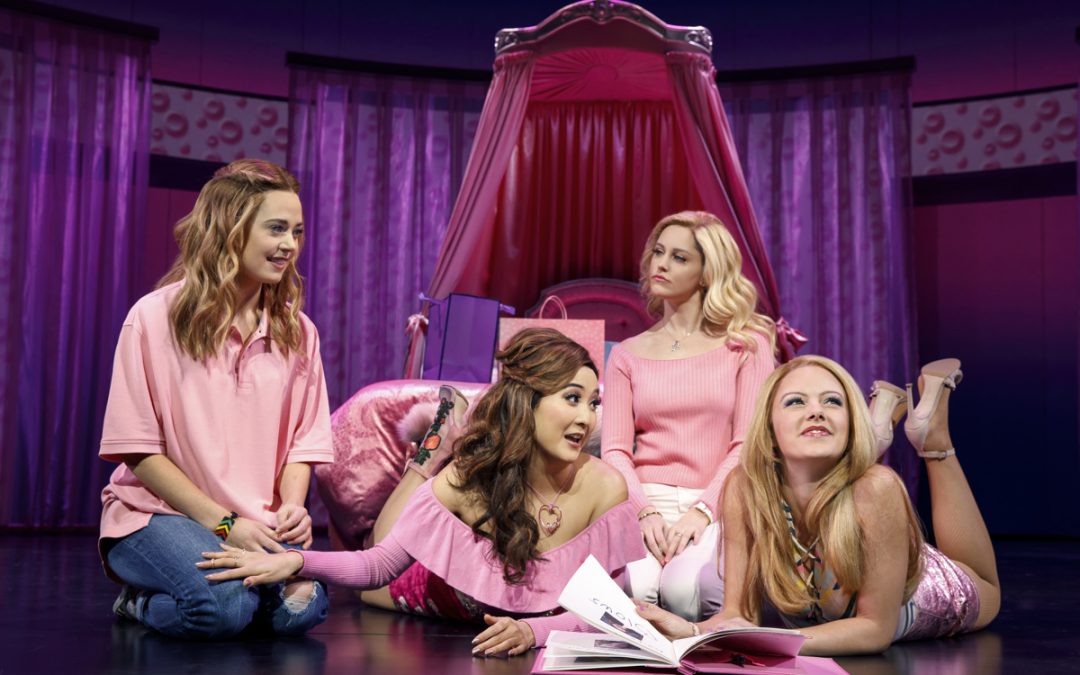 This just in: high school girls are mean. Based on the successful 2004 movie penned by Tina Fey, Mean Girls brings the story to the stage completely intact, including many of the same lines and gags. Janis (Barrett Wilbert Weed) is less goth, more artist in this version, but otherwise not much has changed. And that’s a good thing, because Mean Girls is hilarious, fast-paced, upbeat and delightful.

Its message of female empowerment is somewhat muddled, as it was in the movie. It’s hard not to feel a certain glee at Regina’s antics, at Cady’s transformation to Plastic throughout the course of the story. And the show never quite drives home the hurt that bullying and dishonesty can cause, although we get closest with Ms. Norbury, played effortlessly by the wonderful Kerry Butler. The solution is also presented as something of a contradiction. Janis, in her Act 2 number, advocates that girls should get stronger, should just fight it out, should take their own destiny and get off each other’s dicks. (That’s a quote.) The song felt to me as if Janis wanted the girls to become men, but I suppose it makes a bit of sense given her character. The opposite message comes from Cady (Erika Henningsen): that the only solution is to be true to yourself. I suppose in the case of Janis, acting like a man is being true to herself. Taken in that context, it’s nice to see some gender norms being bucked.

Casting an East Asian girl as Gretchen is great, but this is still predominately a white show, which is a bit of a missed opportunity. Even Frozen managed to do a bit better with this. There’s also some uncomfortable racial stereotyping with the South Asian Mathletes, a casting choice taken right from the movie that maybe should have been reevaluated.

This is a good score, though I fear it doesn’t have enough artistry to surmount The Band’s Visit. It’s a pop musical, with all that that entails. I’ve been calling it Legally Blonde 2, which is a fitting title considering Nell Benjamin wrote the lyrics.

The stage of Mean Girls is kept a bit austere, favoring projections over sets. This gives us a classroom feel, and the use of rolling desks and cafeteria tables is especially clever. Lighting is used to great effect, but it too is kept mostly to the background.

It’s the vocals that really shine in this musical, especially Taylor Louderman (Regina) and Barrett Wilbert Weed (Janis). Those girls can absolutely belt, and their songs are crafted around this fact. Regina in particular is delicious in her overly articulated pronunciation, perfectly lampooning the LA white girl style we’re all so accustomed to hearing. Ashley Park (Gretchen) has some fantastic pipes as well, and Erika Henningsen (Cady) and Kate Rockwell (Karen) are not far behind.

Indeed, this is a show by girls, for girls, starring girls. (The show’s composer, Tina Fey’s husband Jeff Richmond, is hereby inducted into this cavalcade of women: he’s no stranger to writing music for women-lead properties, most recently for the Netflix show Unbreakable Kimmy Schmidt, also created by Tina Fey.) This is a show where most of the men double as women on stage, and they do a damn good job of it.

I couldn’t wipe the smile off my face for its entire runtime. That speaks to its joyous power, to its charm, to its undeniable polish and charisma. Taken as whole, the show feels a bit plastic. But that’s just it being true to itself.

Mean Girls is playing at the August Wilson Theatre.