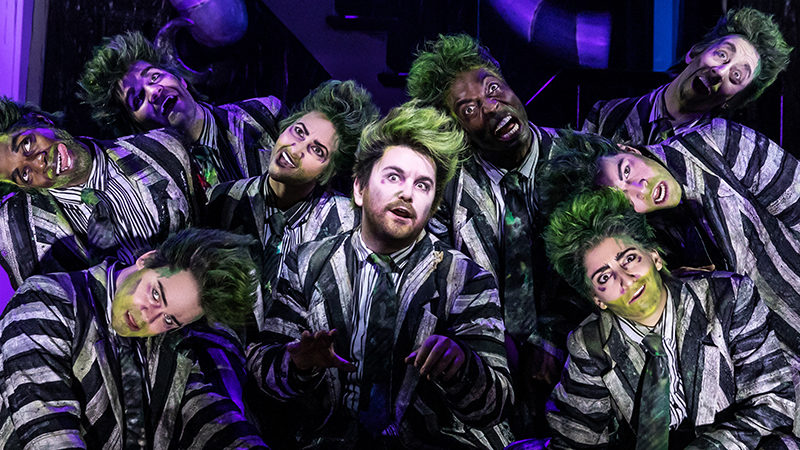 Here’s how you write a hit adaptation: throw out the original material. Take inspiration from it. Remix the story completely. Put your own spin on it.

I’ll cut to the chase. Beetlejuice the musical absolutely nails it. This is an opulent show, with pitch-perfect writing, performances, tech and production design. It’s staged at the Winter Garden Theatre—one of the few theatres positioned inside Times Square—and as such, it’s targeted at the mass market in a big way. This show earns those stripes.

Let’s start with the score, because that’s ultimately what I care about the most. Whip-smart, constantly hilarious, and layering clever lyrical and melodic techniques throughout, Beetlejuice manages to surprise you at every turn. The show is laugh-out-loud delightful, but also manages the sorts of character moments you need for the story to really work.

Now let’s turn to the performances. Where in the actual hell did Sophia Anne Caruso come from? Maybe she really is from the netherworld: her turn as Lydia takes everything Wynona Ryder did and amps it up into a perfect vocal performance. At only age 17, she was the best vocalist in the show and probably the most interesting vocalist I’ve seen this year in New York. (Samantha Barks still wins as best overall vocalist.)

Ah, Alex Brightman. I was so excited to finally see him live, and he did not disappoint. Channeling equal parts School of Rock and Michael Keaton, Brightman pulls off one of the more hilarious performances now on stage. How does he have this much energy? How does he speak and sing with such gravel eight times a week? Only he and his vocal coach know.

This was my first time seeing Kerry Butler in person. She is literally the cutest thing ever. I also have to give shout outs to Rob McClure and Leslie Kritzer as Adam and Delia. Both gave stand-out performances.

As far as the plot goes, this is a show that takes liberal inspiration—and most of the important references—from the movie, but totally transforms the plot into something that is actually comprehensible. I’m not a fan at all of Tim Burton’s original movie. It’s nonsensical, meandering, and incredibly weird for no particular reason. This show takes the worldbuilding and the characters he created and turns it into an actual story, thank you.

Finally a Beetlejuice that makes sense.

I know this is long and gushing, but I also have to call out the production design and the tech. This show did things with sets I had no idea they could do. At the risk of spoiling too much, there are three versions of the house, which takes up the entire stage every time, and they manage to change it out seamlessly. This is not set dressing, at least as far as I could tell. They appear to be different sets. Not only that, but there are projectors embedded in all the sets, and they’ve projection mapped the entire thing. The result is some really cool effects. Add to that multiple stage elevators and fantastic lighting and sound, and you have a wonderful experience that will be impossible to reproduce on tour. They’ll have to redesign the entire show nearly from scratch for the touring production, and a lot will be lost in the process.

See this show in New York.

Verdict: In case it’s not obvious, fly to New York right now to see this show.