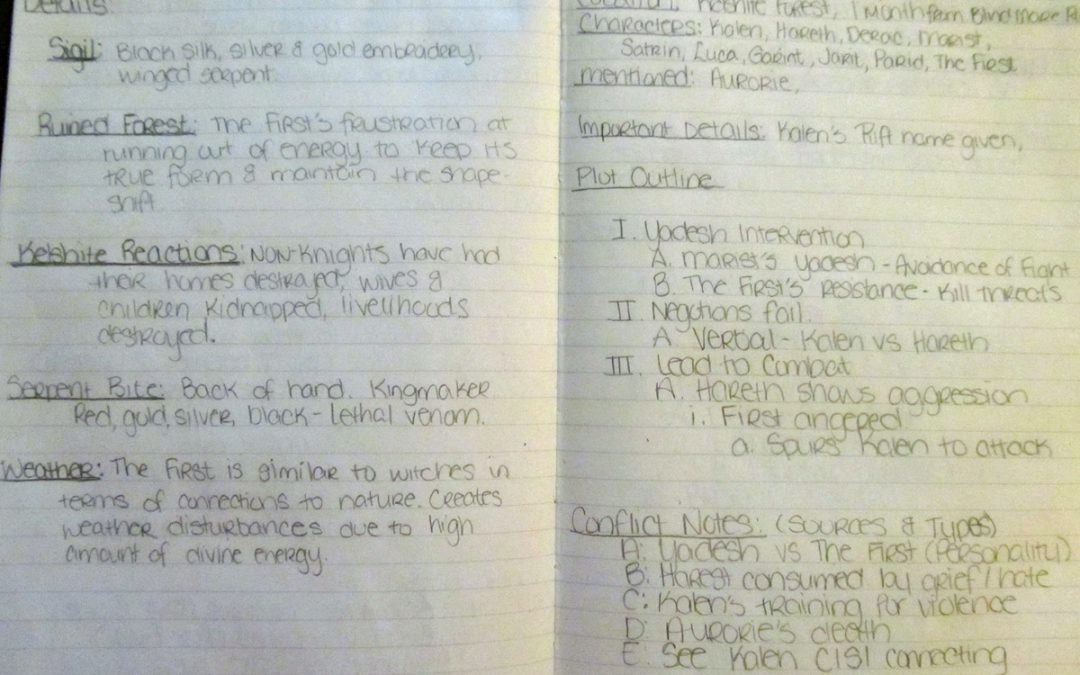 Sometimes your characters say or do something you didn’t expect.

Every writer falls into a spectrum between “architects” and “gardeners” (also called plotters and pantsers). On the left we have writers who thoroughly outline everything down to the scene (or even paragraph!) level. On the right, authors will come up with just a beginning, or maybe even just one scene or character, and see where things go from there. The distinguishing attribute is usually how you come up with your ending: do you figure out your ending first, or do you intentionally avoid knowing how the story ends? Architects usually start with the ending; gardeners don’t.

Most writers are somewhere in the middle. Ryan Lanz has a good post about it where he gives some fun names to authors who are somewhere on the spectrum. I don’t quite fall into any of his categories. I outlined the whole novel, most of the time to the scene level, sometimes in more detail. I designed the magic systems. I also created character sketches for every main character and their two biggest relationships, and I crafted arcs and stakes for each one in advance. (The one thing I didn’t do is a great deal of worldbuilding up front, but that’ll be the subject of another post.)

By all accounts, this puts me far to the left in the architects-versus-gardeners continuum. And yet, my characters and plot still manage to surprise me from time to time. And here’s the key: I allow it.

Rolling with the punches

I had just finished writing a big action scene. I knew exactly how I wanted the characters to come out of it–I’d outlined everything in detail. And yet, inexplicably, a pivotal moment completely changed when I actually wrote it. Like really, really changed.

It just happened. I don’t know why. It just felt right, and I went with it.

It was a massive change. The ripple effects went both forward and backward throughout the book. I’m going to have to replot the rest of my outline, in fact. It was that big.

So why did I allow it?

Something similar happened again, later–this time during revisions. I like to do a trailing revision pass on chapters a day or two after they’ve been written–this gives me a break from writing and helps me tune up the content more granularly. Turns out this is a really good idea, because as I was revising last night, something fairly big happened unexpectedly.

I think very visually. Most of the time my plot is constructed around cool visual scenes that pop into in my head. My job as a writer is to figure out why those scenes exist, how they make sense, and how they fit into the story.

I was simply revising the voice of a character last night, not doing anything major, when suddenly something happened in the plot that was decidedly not there before. It was such a big change that it actually modified my magic system. It happened entirely due to my visual thinking; I had thought of something awesome, and I went with it.

Err on the side of awesome

Brandon Sanderson often talks about this as his “zeroeth rule” (he mentions it on this Writing Excuses podcast–transcript here). Sure, things need to make sense, and to some extent stuff like physics need to be taken into account, even in fantasy. But it’s always important to err on the side of awesome. This is what readers want, after all.

So why did I allow these major changes to my plot and magic system?

Simple. They were awesome.

Don’t be afraid to change things in your manuscript, even big things, even during your first draft. And don’t be afraid to revise as you go–it can help clear your head, and you might accidentally make some major changes that have a very positive impact.

Has this ever happened to you? Does your novel sometimes take control and change things despite your planning? What’s your reaction when that happens? Let me know in the comments.